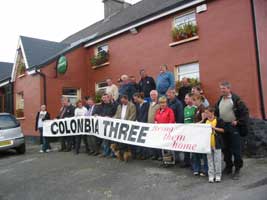 A crowd of over 300 attended Sinn Féin 100th anniversary celebrations in Listowel, County Kerry on 16 September.

The audience was captivated by Martin McGuiness's account of the campaign of sectarian violence endured by nationalists in various parts of the Six Counties over the summer.

McGuinness also spoke of the profound significance of the IRA's July statement, and the sea-change it signalled for politics in Ireland.

Micheál Mac Donncha, spoke powerfully and movingly on the historic connections between Kerry and the Irish republican struggle over the past century. He drew loud applause when he recollected the sweet moment when Sinn Féin's solitary TD in Leinster House was joined by four others and vividly described the venom reserved for North Kerry TD Martin Ferris by the serried clones of establishment TDs. He looked forward to seeing the Sinn Féin Leinster House team further strengthened in the next General Election in the 26 Counties.

The speakers were joined on the platform by Kerry County Councillor Robert Beasley, and Listowel UDC Councillor Anthony Curtin as well as Martin Ferris TD.

Walkers, many of whom have supported the Colombia 3 sponsored walks all over the country over the last four years, recently gathered in Cadamstown for a walk which had been organised by Eileen Shiels and Maureen Fanning, before the return of the Colombia 3. The walk became a re-union as much as a commemorative event of all the good times that people had enjoyed on earlier and often arduous walks, in the campaign to Bring home the Colombia 3.