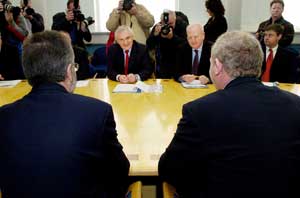 A Sinn Féin delegation led by Gerry Adams met a Fianna Fáil/PD coalition delegation led by Bertie Ahern at Government Buildings on 23 September. According to the Sinn Féin negotiators it was an unremarkable meeting which went through current issues in the Peace Process. What was more interesting was the government publicity 'spin' that preceded and followed the meeting.

The day after the meeting thousands of republicans from all over Ireland paraded in Dublin for Irish unity in the biggest mobilisation in the capital since the anti-war march in 2003. It was a celebratory event that also demonstrated political strength and sent out a clear message about Sinn Féin's determination to achieve its goal of Irish re-unification. The crowd had hardly cleared from O'Connell Street when the event was attacked by Michael McDowell as an exercise in "political necrophilia".

McDowell attacking a Sinn Féin event -- "so what?" you say. It's not that important in itself but it does form part of a clear pattern for the past two years. McDowell has become increasingly vocal in relation to the Peace Process. Bertie Ahern has stepped back and is quite content to allow McDowell to make the running. It has all the appearance of a typical Bertie ploy -- let someone else throw the dirt so you can benefit from the damage to your opponents while escaping any negative consequences yourself. All of this is with an eye to the next General Election and is designed to limit the growth of Sinn Féin.

But the result for the Peace Process is that McDowell's words have been manna from heaven for the DUP and the Justice Minister has been extensively quoted by them in their efforts to prevent progress. The negative response from the DUP to the IRA's decision to end its armed campaign as announced on 28 July is at least partly attributable to the encouragement their negativity has received from Government Buildings in Dublin. Similarly, the negative DUP response to this week's momentous announcement that IRA weapons have been put beyond use has been facilitated by the easy ride they have been given by the Dublin Government and media.

All this must change. Bertie Ahern must show he is serious about implementing the Good Friday Agreement. He can do so by putting McDowell out of the driving seat and asserting his own command of government policy on this issue. He must also fulfil his Government's obligations to make progress on the basis of the Agreement and on the basis of the commitment to Irish unity in the amended 1937 Constitution. His programme should include:

o Advancing the All-Ireland agenda on all fronts by acting now to develop co-ordination and integration of infrastructure and public services on an island-wide basis, encouraging a similar process in the private sector and the voluntary and community sector.

o Fulfiling his commitment made in 1998 to advance the issue of Six-County representation in the Oireachtas. Speaking rights in the Dáil for all Six-County MPs should be provided for without further delay.

o The repeal of the Offences Against the State Acts.

o Given the momentous and historic decisions by the IRA, the release of all remaining IRA prisoners.

o Strengthening the Human Rights Commission and having due regard to its recommendations, something that McDowell as Justice Minister has failed to do.

This is not an exhaustive list but progress is overdue on all of these issues.

The question for Bertie Ahern is will he and Tony Blair allow the DUP to obstruct the Peace Process. The excuse of silent IRA weapons that has been used by unionists and the British throughout this process is now removed. Will this become a DUP-watching exercise, or will the two governments move to implement those parts of the Agreement for which they are directly responsible, including the completion of British demilitarisation?

As the leader of Fianna Fáil, a party which claims to be committed to Irish unity, Bertie Ahern should also be setting out his strategy for its achievement. The commitment to Irish unity should be the underlying principle of his government's policy.