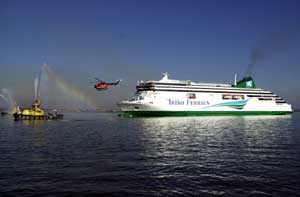 The Seamen's Union of Ireland has described a redundancy package offered to Irish Ferries workers as nothing less than 'holding a gun to the head of Irish workers.'

Union General Secretary Bob Carrick explained workers were being presented with a form offering a number of options, but that if they refused to accept either severance or a cut in wage and conditions, redundancy would be compulsory.

"There has been a huge level of uptake of the proposed redundancy package," Mr Carrick admitted. "People are frightened of the implications if they don't take it. The proposed pay rates are absolutely unacceptable but if workers are forced to take compulsory severance they are not entitled to mortgage protection. The company is holding a gun to the heads of Irish workers."

There are implications for the Seamen's Union itself as Irish Ferries provides the overwhelming majority of the union's membership.

The government has also stepped into the dispute with the Department of Enterprise, Trade and Employment referring the redundancy package to the Attorney General to obtain clarity on whether Irish Ferries is entitled to a subsidy to help pay for the package. It is thought that Department officials believe that since the redundancies relate to replacing workers, rather than jobs actually being lost, Irish Ferries might not be entitled to the €6 and €7 million it is claiming.

"I would hope the Government will not assist the company in any way in the sell-out of Irish jobs," said Bob Carrick, a comment echoed by SIPTU President Jack O'Connor.

SIPTU and the International Transport Workers' Federation (ITWF) are organising a special meeting of supportive trade unionists and parties in Liberty Hall today while yesterday Sinn Féin TD Arthur Morgan questioned the Minister for Enterprise, Trade and Employment on the issue in the Dáil.

The British Trade Union Congress has overwhelming rejected the proposed EU Constitution, describing it as 'elitist, militarist, corporate and anti-democratic'.

The motion, proposed by the Union of Rail, Maritime and Transport workers received the support of the major British trade unions.

More than 300 members of the Irish Nurses' Organisation, meeting in special delegate conference in Dublin on Tuesday, voted to reject the proposed Terms of Reference for the second benchmarking exercise.

This means the INO's major demands, including a 35-hour week, pay parity with other healthcare professionals and equality of pay between social care workers and Registered Nurses in Intellectual Disability will be pursued directly with employers.

It is a major blow to the Government's commitment to benchmarking and Social Partnership.

Delegates also discussed the next phase of the INO's Enough is Enough campaign, which has successfully highlighted overcrowding in A&E wards and turned the screw on embattled Health Minister Mary Harney.