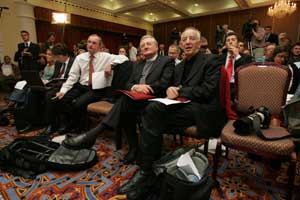 Clear differences within unionism have opened up this week in relation to the most appropriate response to the latest groundbreaking IRA initiative. The DUP leader Ian paisley has alleged a "cover up" while the UUP sees potential for progress.

At a press conference immediately after the IICD delivered its report Paisley said people had been "betrayed". Accusing the British and Irish government of duplicity and dishonesty and dismissing the clergymen witnesses as "appointees of the IRA" the DUP leader declared the report a "complete failure"

"This afternoon the people of Northern Ireland watched a programme which illustrates more than ever the duplicity and dishonesty of the two governments and the IRA. Instead of openness there was the cunning tactics of a cover up and a complete failure from General John de Chastelain to deal with the numerics of decommissioning", said Paisley.

That the two witnesses "were clearly under the control of the general", added nothing to the proceedings and because they were "accepted by the IRA", the clergymen "could be in no way be independent", said Paisley. He accused the British government of "bad faith" because he had promised that the process would be conducted to everyone's satisfaction and it hadn't.

"The people of Ulster are not going to be forced by IRA/Sinn Fein or by the two governments, along the pathway of deceitfulness and treachery. Hidden things of darkness are surely coming to light in the extent of the shameful betrayal of truth that will be uncovered", said Paisley.

Initially the UUP seemed to be taking its cue from the Paisleyite. UUP Leader Reg Empey claimed the procedures had failed to maximise public confidence. "Unionists remain to be convinced of the republicans movement's commitment to exclusively peaceful and democratic means". The UUP would wait and see, said Empey.

UUP colleague John Taylor was marginally more forthcoming. The IRA's initiative was "major and significant" and represented "real progress". But in his eyes inclusive democracy remained in the gift of unionism. "Clearly some considerable time will be required to assure unionists that the IRA is no longer a threat to them. In the meantime Sinn Fein cannot be in government or in membership of the Policing Boards."

However by Tuesday Paisley's questioning of the independence of the two independent clergymen witnesses met with a rebuke from the UUP spokesperson Danny Kennedy and it showed a growing divergence between the two parties' evolving position on the potential contained in the IRA initiative.

Kennedy said that he accepted that Alec Reid and Harold Good had faitfully recounted what they had witnessed and that the IRA act of putting all its weapons beyond use was significant.

Kennedy said that he personnaly knew Harold Good and that "under no circumstances would I question or would my party question the integrity or honesty of the Reverend Harold Good. However, I would have to say also that it remains a matter of great regret that others from the Christian tradition have chosen to do so."

Kennedy said that the UUP would give "careful assessment as to whether the "IRA was honouring its commitments to put away its weapons and end activity".

Spaeking in Cork on Tuesday and in Dublin on Wednesday Sinn Féin President Gerry Adams said that he believed that Paisley realised that the IRA had put its arms beyond use, and his egative comment "was delaying stuff, was all negotiating.