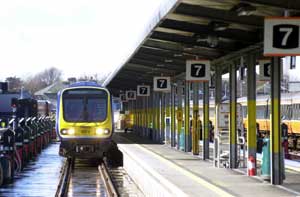 As next month's expected government announcement on the future of the Western Rail Corridor nears, it was brought home to Minister Dick Roche exactly how important the re-opening of the rail network is for the region.

The Minister for Environment, Heritage and Local Government officially launched the Border, Midland and Western Regional Foresight Report in Ballaghaderreen, County Roscommon recently. If Minister Roche took the time to read the comprehensive report, he could not have missed the inclusion of the opening of the WRC as one of the regional assembly's Priority Projects.

Intense pressure put on the government from community groups, businesses and political parties, including Sinn Féin, especially over the past three years, has forced the coalition to publicly announce that it is committed to the opening of the line but fell short of declaring a timeframe. Speculation about the future of the WRC is now focused on what sections of the track are to be prioritised initially.

Speaking to An Phoblacht, a spokesperson for the community campaign West on Track, which fed into the BMW Report, said it was highly unlikely that the project would only proceed from Ennis to Athenry or to Tuam, while long-fingering Mayo in the short term and postponing Sligo indefinitely. It has become increasingly difficult for the government to justify stalling the re-opening of the Western Rail Network. Such stalling has pointed up the regional neglect that has become Fianna Fáil/PD Government policy.

Mayo Sinn Féin County Councillor Gerry Murray said that the government's dependence on road as opposed to environmentally safer transport modes like rail is costing the taxpayer. He points to the fact that one mile of M50 costs €100m while according to Iarnród Éireann estimates, 68 miles of new railway would cost €168m.

It is understood a major conference on the WRC, to be attended by elected representatives from the BMW region, will take place in Dublin in early October. The government is finding it increasingly more difficult to renege on this commitment.