De Chastelain announces IRA have put weapons beyond use 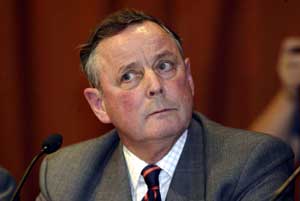 At a packed press conference on Monday 26 September the head of the Independent International Commission on Decommissioning (IICD) announced that he was satisfied that the IRA had completed the process of putting its weapons beyond use.

Retired Canadian General John De Chastelain said the IICD had reported to the Irish and British Governments that it had observed and verified events to put the IRA's arms beyond use.

He said that the material involved included ammunition, rifles, machine guns, mortars, missiles, hand guns, explosives and explosive substances. De Chastelain said that as far as he was aware, no photographs were taken of the process and certainly none by the commissioners. He also said it remained for the IICD to address the issue of loyalist arms and he asked everyone with influence to use it to that end.