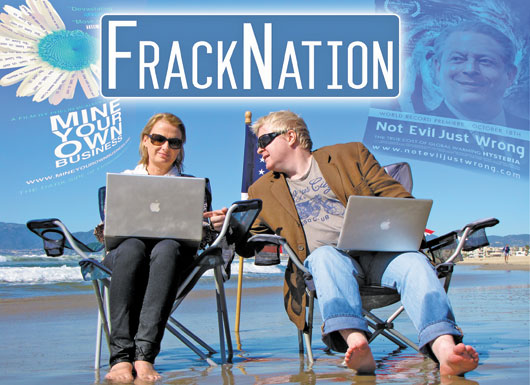 TWO IRISH FILM-MAKERS and celebrity speakers at rallies for Tea Party neo-cons and climate change deniers in the USA are turning their fire on campaigners against the dangerous oil and gas exploration technique of ‘fracking’.

Husband and wife team Phelim McAleer (from Omagh) and Ann McElhinney (from Bundoran) have become such hits on the American Right that they’re now billed as the most popular conservative speakers after the notorious broadcaster Rush Limbaugh and columnist Ann Coulter.

McAleer and McElhinney have raised $150,000 from anti-environmentalist and conservative sponsors for their new film, FrackNation, billed as a riposte to the powerful Gasland. But the pair are not stopping there and they are openly pressing US neo-cons to open their cheque books more to fund their latest assault on community campaigners.

Earlier films made by the couple include Not Evil, Just Wrong – hitting back at Al Gore’s acclaimed film on global warming, An Inconvenient Truth. Joseph J Romm, a physicist and elected Fellow of the American Association for the Advancement of Science, has said the title Not Evil, Just Wrong is perhaps the most unintentionally ironic film title in history - it has nine errors just in the trailer!

Another film by McAleer and McElhinney is Mine Your Own Business, making the case for exploration companies and juxtaposing jobs and local economies against the health and quality of life issues espoused by environmentalists.

The globe-trotting Irish pair now living in California miss the irony when McAleer says: “Look at environmentalism. It’s outsiders coming in and treating people like children.” He’s a former journalist with the Irish Independent and London Sunday Times.

The wild-eyed and wild-haired McElhinney spoke at the Conservative Political Action Conference in February, warning against “anti-fossil fuel rants” in a self-made T-shirt with a slogan saying “Fracking Brilliant”.

McElhinney, describes herself as a “recovering European”. She tells anyone who will listen that she is very sorry that she’s not an American but ‘plans to work on that’. Her self-loathing includes her describing herself as previously having been “a big, fat, ugly liberal”.

McElhinney claimed at a Women’s Conservative Network event in June 2009 that she “used to be a liberal” but became a conservative after she and her husband went to cover a story on a mining company operating in Transylvania, Romania. She claimed that they already had the story written about an ‘evil mining company’ destroying a rural town but when they arrived “everything we presumed about the story was wrong”. What McElhinney, who used to work for RTÉ and The Irish Times, fails to mention is that she went to the Rosia Montana mine to make an anti-environmental ‘documentary’ - Mine Your Own Business - which had been almost entirely financed by Gabriel Resources, the very company that locals and environmentalists were protesting against. So it is highly unlikely that she was planning to produce a tale about an ‘evil mining company’ given that it was the same mining company that was paying her wages.

The couple’s Not Evil, Just Wrong: The True Cost of Global Warming Hysteria was made thanks to $1million in donations from wealthy real estate agents. An application for funding from the Irish Film Board was rejected. As the films title suggests, despite overwhelming evidence that global warming is caused by human processes such as burning fossil fuels and deforestation, it argues that there is no conclusive evidence for this and that restrictions on fossil fuels and an increase in green energy is bad for Americans.

Apart from the numerous factual inaccuracies in the film and the misattribution of quotes to people, the ‘expert’ contributors make some utterly moronic observations. Apparently, environmental activists want to “go back to the Dark Ages and the Black Plague”!

Anne McElhinney has said of film-makers: “Some of us tell the truth, and some of us lie.” FrackNation is due to premier in the US on 10 April. We’ll be able to see again which category McAleer and McElhinney fit into.