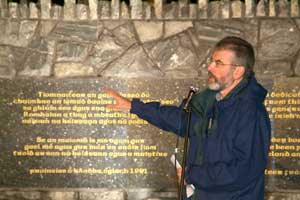 A large crowd of republicans from South Derry and North Antrim gathered on Saturday 10 September at Lavey Churchyard, South Derry before parading to the new Republican Memorial Garden in Gulladuff. Two memorial stones were unveiled listing the names of republicans from the area who have died in the cause of Irish freedom over the centuries.

The procession was lead by a delegation from An Fhirinne carrying a banner highlighting the collusion between unionist death squads and the British state.

Adams paid tribute to those whose names were inscribed on the two new plaques, of which there are over 100. He said they were ordinary people who had come forward from both counties. Some were IRA Volunteers, many of whom he had known in prison and others were Sinn Féin activists. Both counties, he said, should be proud that they bred such people.

Adams went on to say that in recent months republicans have passed through some significant crossroads, but that their goals are still clear. "Those are to end partition, bring together both traditions of Orange and Green on this island, to create a better standard of living for the people of Ireland and to make republicanism relevant to a wider section of people here.

The Sinn Féin president urged republicans, "not just to pay tribute to our patriot dead but to re-dedicate ourselves to the struggle for which they died".

Adams also asked that everyone give their full support to An Fhirinne who were fighting to, "bring the Brits to book", for their role in so many deaths.

Of the IRA statement of 29 July Adams said: "It was not made in isolation but was about you the people. Whatever people think about the statement and the direction it takes us, and it is good to disagree and discuss things, but at this time we need to be united. The IRA statement was not a statement of weakness but of huge confidence."

Concluding, Adams said the people of the area should be proud of their achievements, especially the work they done in building the new Sinn Féin centre at Gulladuff.

He also called on those assembled and republicans from across Counties Derry and Antrim to make their way to Dublin on 24 September for the Make Partition History rally.

"I would like to see young people turn up with their banners, posters, names of those killed, the names of the people inscribed on the wall behind me. We are going to be the generation to live in an Irish Republic." This he said would be a fitting tribute to the 100 names on the memorial and the countless others who have died.