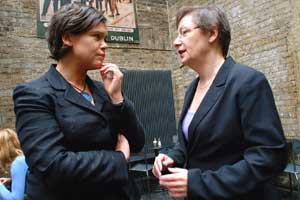 Monday 5 September marked the beginning of the first European Parliament session in Strasbourg since the summer recess, ensuring a busy week was in prospect. After arriving at the EU Parliament building and responding to a mountain of e-mails, I prepared to deliver a speech in the chamber on the Peace Process and continuing unionist violence across the Six Counties.

While some other Irish MEPs focused on the return of three Irishmen from Colombia, I updated other MEPs on the continuing orchestrated campaign of unionist violence which has intensified in recent months. I also welcomed the Irish Republican Army initiative of 28 July and gave an assessment of the current political landscape. It was interesting that none of the other Irish MEPs could even bring themselves to acknowledge the immensity and potential of the IRA's move — this speaks volumes about the priorities of the establishment parties in Ireland.

On Tuesday I met with a number of disability campaigners who had travelled out to Strasbourg to press for the greater recognition of rights for people with disabilities. Approximately 60-million people in the EU have some form of disability and campaigners were at pains to point out that of that number, three million were living in institutions. I participated in a number of workshops with the campaigners and wished them well for their protest march through Strasbourg, to coincide with the arrival to the Parliament of the EU Commissioners.

With thoughts of the work of the campaigners still in my mind, I went back into the parliament chamber and spoke in favour of a report on social inclusion. I spoke in favour of a report by Karin Jöns MEP regarding the establishment of a community programme for employment and social solidarity PROGRESS‚ between the years 2007 and 2013. In particular, I welcomed the emphasis placed upon the inclusion of gender mainstreaming, people with disabilities, the role of the European Parliament and the NGO sector in the programme. If projects such as these are to be successful, then resources need to be targeted and sustainable. Too many projects fall by the wayside due to a lack of foresight or political enthusiasm.

On Wednesday I again spoke in Parliament, this time regarding gender inequality in health. The report by Eva-Britt Svensson MEP contained practical recommendations that were worthy of support from the European Parliament. The report highlighted statistics emanating from Scandinavia which suggests that there are inequalities in the response of health systems and services in relation to women and men. Indeed, it has been said that being a woman is bad for your health. Available statistics reinforce this commonly held assertion. The World Health Organisation has estimated that 1/5 of women in the world have been/will be subjected to physical or mental abuse during their lifetime.

On Thursday morning I briefed the European United Left/Nordic Green Left on the state of the Irish Peace Process and the unionist campaign of violence across the North. The briefing was part of an on-going series of engagements with MEPs from across Europe, on the situation at home. I briefed the group on the IRA initiative of 28 July and the potential for unlocking the Peace Process. They were keen to hear at first hand, about the systematic and orchestrated campaign of violence by unionist paramilitaries and the unwillingness of the PSNI to deal with the situation. The MEPs were keen to find out what kinds of initiatives they could get involved in to assist the political process.