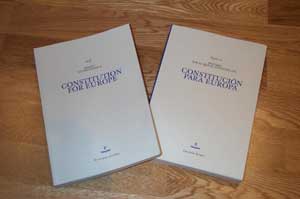 The European Parliament is back in session from this month after its annual six-week break. MEPs have been busy in their countries while the formal business of parliament has stopped. However, while MEPs and their staff are now back in place there is much uncertainty in the corridors of Brussels and Strasbourg. Indeed much of the EU press is talking up a crisis of the Union itself.

Following the Dutch and French rejections of the EU Constitution, and the decisions of the Irish, Czech and British Governments to postpone their referenda, there is little clarity as to where the constitution process goes now. Initially EU leaders were publicly optimistic, calling for a period of reflection. However, in the clearest and most pessimistic public intervention to date, President of the European Commission Jose Manuel Barroso last week said that there was no clear future for the Constitution.

More significantly, and contrary to much of the Yes Campaign propaganda emerging from Brussels during the French and Dutch campaigns, Barroso admitted that the EU would continue to function as normal without a Constitution. he even hinted at the possible burying of the entire Constitution process.

Meanwhile back in Ireland Bertie Ahern is set to publish his referendum bill in the autumn. While he says that the Irish people must have their say on the EU Constitution he has yet to outline exactly what it is they are to pass verdict on, as without support from all 25 member states the Constitution can not come into force. The French and Dutch No votes mean that irrespective of the outcome of any Irish referendum the Constitution remains dead in the water.

The official line from Brussels is, of course, that the Constitution process will continue. In typically arrogant fashion, the view from the Commission is that the French and Dutch No votes were not a rejection of the Constitution itself, but rather the result of a failure of the EU institutions to communicate their message and more importantly the many benefits of European integration, to the citizens of the member states.

Expect much talk of re-invigorated communication strategies and "connection with the citizens" from the Commission and the European Presidency in the months ahead.

Of course the Constitution is not the only problem facing the EU. In true 'it never rains but it pours' fashion the AEU is facing three additional problems of significant magnitude. EU heads of state have yet to agree a budget for the coming seven years, despite many months of negotiations. The French, Germans and British are in a stalemate over the issues of structural funds, the British rebate and aid to farmers. If the leaders fail to reach an agreement it will mean that the EU cannot agree a budget and funding will be on an annual basis at the previous budgets rates, leaving no room for additional expenditure or inflation.

As if this was not bad enough the question of Turkey's membership of the EU is also provoking great division. The French, Austrians and Germans are increasingly opposed to the final stage negotiations with Turkey, despite the fact that the date has already been set for October of this year and the most optimistic assessment of their length is ten years. In each country the Christian Democrats are trying to mobilise opposition to Turkish membership for domestic political gain.

On the left of the parliament the European United Left/Nordic Green Left and the Greens would welcome Turkish membership if issues such as Cyprus, the Kurds and criminal justice reform are tackled by Ankara. However, and depending on the outcome of the German elections in October, the question could become one of the most divisive within the EU.

Of course all of this is provoking a negative reaction in Turkey, as those forces opposed to membership of the EU are gaining ground. However, as the Erdogan government does not favour a referendum on future entry to the EU it is unlikely that the Turkish people will have a say in such a crucial decision about their future.

Finally, the EU is also embroiled in one of the most protracted policy debates in recent years. The much discussed Services Directive, being promoted by Commissioner Charlie McCreevy is reaching a head. This controversial directive, which aims to radically liberalise the provision of private and public services across the 25 member states, looks set to be rejected at Parliament before December. If this happens it will mean the complete scrapping of the directive. However, the commission won't lie down so easily, and will more than likely go back to the drawing board and draft a new and more durable directive.

Substantial mobilisation by trade unions and left parties in Germany, France, Holland and Italy have created a significant EU-wide opposition, however whether this will be enough to defeat a Services Directive Mark II remains to be seen. What is clear is that if the Directive is not defeated at parliament it will mean that countries with high levels of social protection will be transformed into liberalised economies much like in McCreevy's last job- Ireland.

So MEPs are returning to a highly charged and deeply divided EU. Whether crisis is the appropriate term remains to be seen, however unlike earlier parliamentary years this one looks set to host some of the most important ideological confrontations of recent years.

On Monday 5 September, the plenary session opened in Strasbourg with discussions around the natural disasters which have affected the globe in the last number of months, particularly the catastrophic tsunami in Southeast Asia, and more recently Hurricane Katrina in the USA.

The main political discussions of the week surrounded the public statements from British Home Secretary Charles Clarke for the EU Presidency and from the European Commission regarding the response to terrorism‚ in Europe.

Charles Clarke also spoke at a summit of European Interior Ministers and set out his stall for the time ahead. However, the Ministers failed to reach agreement on a number of key areas including the retention of citizens' personal data, through mobile telephone and e-mail records.

Inevitably, civil rights groups expressed their concerns with such proposals. It is becoming increasingly clear that the European Union has been intent on limiting the civil and human rights of citizens, using terror attacks as the cover or justification for such an approach. From data retention to biometric passports to a fortress Europe‚ we are moving inexorably closer to a 'big brother'‚ superstate.

The bomb attacks against the people of London on 7 July were entirely unjustifiable but such an atrocious event should not be the catalyst for the further erosion of human rights. Present EU policy is fixated on security at the expense of freedom and justice. This will not make people or communities in Ireland or the EU any safer.

One other interesting topic up for discussion was the issue of workers' rights. The European Parliament voted down a proposal on protecting workers from optical radiation. The so-called 'tan ban'‚ aimed to ensure that outdoor workers are protected from the harmful effects of over-exposure to the sun. The matter was left unresolved after the European Parliament failed to make a final ruling. National Governments will now have to decide for themselves whether workers should be required by their employers to cover up to avoid excessive sun.

Meanwhile, the REACH directive (Research Evaluation and Authoris-ation of Chemicals) is designed to improve consumers' rights through the strict regulation on which chemicals can and cannot be used in industry and household goods.