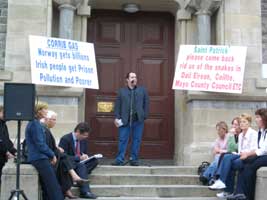 As the five men from Rossport, County Mayo spent their 79th day in jail for defending the interests of their community, protests supporting them continued all over Ireland.

Last weekend saw the blockade of the Shell depot at Dublin Port, as well as a march and rally in Sligo Town. Other protests took place at Nenagh, County Tipperary, Dundalk, Tralee and Dublin.

Taoiseach Bertie Ahern has publicly urged the five men to purge their contempt, though no similar appeal was made to Shell to rescind the injunction which led to their imprisonment.

Speaking in Erris, County Mayo, Ahern said that the five men "have made their point" and that he does not see "any further point in them remaining in jail". He also said the five "have a very easy way of resolving the issue".

While Ahern claims to be listening, it is obvious that the government is feeling the pressure as the issue continues to generate widespread interest and support.

Sinn Féin and Independent TDs have continued to make public representations in support of the Rossport 5. Meanwhile, the Green Party has broken its relative silence on the matter and called for a full oral hearing into the Corrib onshore gas pipeline as an attempt to resolve the issue of the men's imprisonment. Fine Gael and Labour have appealed to Shell to lift the injunctions, but neither party supports the Shell-to-Sea campaign and are not willing to call for a full-scale review of the entire Corrib project.

On Saturday 10 September around 80 activists blockaded the Statoil distribution depot in Dublin Port stopping oil distribution for several hours. The blockade was peaceful and passed without incident. Tadhg McGrath, a Sinn Féin activist and Shell-to-Sea campaigner said: "Ordinary members of the public came out to the protest and a lot of money was raised there. The following day Ógra and Shell-to-Sea campaigners did a fundraising collection around at the pubs in the vicinity of Croke Park on All-Ireland Hurling Final day and a phenomenal amount of money was raised as well as an enormous amount of goodwill."

The same day saw a march and rally in Sligo Town organised by the local Shell-to-Sea campaign. A crowd of around 1,000 people marched through the town for a rally at City Hall. Among the speakers were the wives of the Rossport 5. Later a fundraising gig was held in the Trades Club on Castle Street. Sinn Féin Councillor Chris McManus said he was "glad see the people of Sligo turn out in impressive numbers and show solidarity to the Rossport 5 and their families". He pointed out that "Sligo County Council and Sligo Borough Council were the first two local authorities in the state to call for the release of the Rossport 5".

On Wednesday 7 September last, Mícheál Ó Seighin, Willie Corduff, James Philbin and Vincent and Philip McGrath appeared at the High Court where the men's legal team planned to make an application for discovery of documentation in preparation for a full hearing on 4 October next. As it happened the hearing did not discuss the purging of contempt or the Shell injunction. During their time in court they were allowed to freely mix with their families and friends and it would appear that their resolve, determination and good humour remain undiminished.

Early indications are that the Norwegian general election on Monday 12 September has seen the Conservative centre-right coalition lose out to the challenge of the Labour Party. While the Labour Party hasn't formed an outright majority, it is expected that they will form a Red-Green coalition government, including the Socialist Left, the Green Party and the Centre Party.

The Socialist Left is internationally affiliated to European United Left/Nordic Green Left, the group with which Sinn Féin is aligned in the European parliament. Among the Socialist Left's policies is one in favour of a Statoil pull-out of the Corrib gas project.

An issue in the election was how the wealth generated by Statoil, Norway's nationally-owned oil company, should be used, with the Labour Party arguing that this wealth should be spent on further developing social infrastructure.

The issue of Statoil's partnership with Shell and their involvement in the Corrib Gas controversy as well as the imprisonment of the Rossport 5 was also highlighted during the election campaign. Most Norwegians have serious concerns about the involvement of Statoil with Shell, a company with a notorious international reputation which is not helped by the its responsibility for the imprisonment of small landholders opposing the construction of an illegal pipeline through their land.