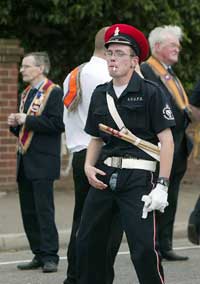 The over-riding message carried by the Irish media in relation to the Orange rampage in the Six Counties over the past week is that the PSNI and British Army were under extreme pressure. However, as has ever been the case, nationalists, including children have been the targets of sectarian thuggery dressed up as political protest.

Last weekend can't be understood outside the unionist campaign of violence against nationalists throughout the summer. Unionist blockades and rioting, petrol and blast bombing and gunfire deployed by unionists was the culmination of months of violence.

Historically British rule in the North has been maintained through the dynamic of sectarianism. Artificial and inherently unstable, the Orange state has been sustained by anti-Catholic and anti-nationalist discrimination and repression with regular bouts of extreme Orange violence. This is a historical truth that Britain has been traditionally reluctant to acknowledge.

Faced with the exposure of hours of television film footage and newspaper reports of unionist rioting, Peter Hain initially attempted to dismiss unionist violence as an anathema, unsustainable with no particular significance. In other words better to ignore.

"What we had at the end of July was an historic IRA statement, taking away the whole basis of the conflict between Catholics and Protestants, between nationalists and loyalists", said Hain, desperately trying to re-assert the dominant discourse that places responsibility for all violence with republicans.

As for unionist paramilitary ceasefires, Peter Hain was initially determined to remain convinced that they are intact. After all they had remained officially "intact" throughout a summer of violence against nationalists and months of murderous feuding.

However, machine-gun attacks on PSNI officers are more difficult to sweep under the carpet. Hain needed time to view the evidence, evaluate the situation. By Tuesday it was clear that evasion was no longer viable. Ignoring the UDA's role in the past week's violence, Hain announced he would "specify the UVF in the coming days". The UDA had only been "caught up in the trouble".

Instead of purely targeting nationalist civilians over the past week unionist violence was turned against state forces. Ideological confusion was rife as an Orangeman confronting a PSNI officer shouted: "Are you a Fenian?"

The international news media was struggling to report events without recourse to the usual pro-British, 'two warring tribes' model. Aljazeera abandoned all attempts to stick to the facts by claiming that PSNI officers had been injured "as they kept apart rival Catholics and Protestants".

Meanwhile, the Orange Order insisted that re-routing what is essentially an anti-Catholic parade away from Catholic homes was such a fundamental attack on Orange culture that violent reaction was inevitable. The Springfield Road march is only one of a handful of contested parades out of a total of over 3,000 annual Orange marches.

Orangemen were only required to divert for 126 paces. It is difficult to understand just what it is about Orange 'culture' that is under threat, unless of course the only fundamental tenet of Orangeism is the expression of anti-Catholic sectarianism. After all there is no point of burning a cross at your own front door.

Faced with having to contain their sectarian display during Saturday's parade Orangemen contented themselves by urinating in the gardens of the nationalist homes they had been allowed to march past and playing offensive sectarian songs.

Following three days of rioting and looting, senior Belfast Orangeman Dawson Bailie refused to condemn the violence and in fact defended the actions of the perpetrators. "As far as I'm concerned the people to blame are the Secretary of State, the Chief Constable and the Parades Commission", said Bailie.

"I'm not condemning anything," the Orange Order County Grand Master told the media. But for an organisation that claims to be the guardians of civic duty, law and order and the Protestant faith the position was unsustainable.

Within hours of Bailie's comments, head of the Order Robert Saulters re-defined the Order's position. Saulters condemned the violence on the curious grounds that "it's only our own people who are suffering".

Saulters was responding to PSNI Chief Constable Hugh Orde's comments that placed the blame firmly with the Orange Order. Orde said the Order bore substantial responsibility for the rioting and attacks on the PSNI. Orangemen had breached the Parades Commission's determination and the parade had become illegal. The violence had been orchestrated, said Orde. "The Orange Order must bear substantial responsibility for this. They publicly called people onto the streets. I think if you do that you cannot then abdicate responsibility. This is simply not good enough."

Only hours before the violence Orangemen and unionist politicians evoked the spectre of widespread violence if the Order did not get its way.

Two days prior to the proposed parade DUP leader Ian Paisley announced the issue "could be the spark which kindles a fire there would be no putting out". The DUP leader has built his career out of such coded messaging.

The PSNI chief refused issued film footage evidence of Orangemen engaging in violence against the PSNI. "I have seen members of the Orange Order in their sashes attacking my officers. I have seen them standing next to masked men orchestrating the violence," said Orde. Within hours we were all seeing it on our television screens.

Meanwhile, UUP leader Reg Empey was "shocked at some of the tactics being used" by the PSNI. For most northern nationalists, who have suffered years of brutality at the hands of the unionists' beloved RUC, such comments are pure hypocrisy.

For Empey the source of the violence was not just the Whiterock parade but was "much more deep-seated than many are perhaps prepared to accept". Unionist communities were suffering "more deprivation, more educational under-achievement and greater unemployment than before".

Before what? Before they were being asked to compete on an equal basis with nationalists within the labour market? Empey evokes the notion of the Protestant underdog without actually lying about the facts. Sinn Féin's Mitchel McLaughling spelt it out: "The facts speak for themselves. 70% of people living in the ten most deprived wards, as measured by the Noble Index, are Catholic.

"Multiple deprivation statistics published in May this year show that West and North Belfast, Derry City, Craigavon and West of the Bann continue to be the most deprived parts of the Six Counties.

"According a report Indicators of Social Need‚ published by Stormont's OFMDFM last year Catholics fare worse than Protestants on every single economic indicator. But despite plenty of information to the contrary, the media continued to pursue the line of unionist deprivation.

While the British media was content to spin yarns of justification the Irish media decided just to ignore it. In the Sunday Independent Ruth Dudley Edwards, a champion of The Faithful Tribe, who only a few months earlier was cock-a-hoop about exposing what she happily perceived as republican violence, was strangely quiet. For a historian and journalist that had taken such a special interest in the Orange Order a failure to comment on the week's events was particularly noteworthy. Dudley Edwards devoted herself to an article on Harry Potter and Ken Clarke's bid for the leadership of the British Tory Party. It seemed curiously appropriate for a right-wing fantasist.

So was unionist violence simply triggered by the denial of 125 yards of an Orange parade? It's possible. The current position of unionists in relation to Orange marches is totally untenable and susceptible to outbursts of irrationality and violent displays. Or was it just a convenient excuse? A pre-emptive strike aimed at undermining the possibility of political progress following the IRA's current initiative?