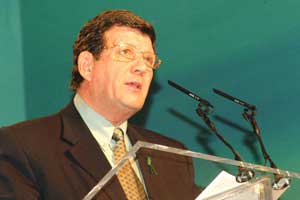 Sinn Féin Vice President Pat Doherty has called for widespread Garda reform. He was speaking in Raphoe, County Donegal, last Saturday afternoon at an event organised by the McBrearty family and others who have had a similar experience at the hands of the Garda Síochána.

"The fact remains that the Morris Tribunal will not bring us the whole truth," he said. "Reform and greater accountability of the Gardaí are urgently needed. The onus for change is on the Minister and the key to this is reform that introduces effective oversight of the Garda Síochána and real accountability to communities.

"The Gardaí are a legitimate police service and I recognise the good work done by many Gardaí in our communities over the years. However, their history is not unblemished. And it is not just a case of a few bad apples in the Heavy Gang, or a bushel of them in Donegal. Misconduct has been much more widespread. The Special Branch has also been used as a political police force against republicans. The power of the Gardaí has been abused and those guilty have generally gotten off scot-free.

"The Morris Tribunal reports, detailing as they do the prejudiced investigations, the lies, the destruction and falsification of records, reports and other evidence. shows that there is an urgent need for "root-and-branch reform" of the Gardaí, the way the force is managed and how complaints against them are dealt with.

"This report explodes the myth of a few rogue cops in Donegal. We need only look at who was found to be corrupt, obstructive, or at the very least incompetent and negligent in Donegal: a Chief Superintendent, four Superintendents, and members of every other Garda grade.

"It points to a whole managerial system that allowed such activity to happen unhindered and unpunished. Indeed the comments of Garda Commissioner Noel Conroy in the aftermath of the Morris report, in offering a defence of the actions of the Gardaí involved in the investigation into the death of Richie Barron and the subsequent efforts to frame Frank McBrearty and Mark McConnell, shows that the mindset that was involved in the original investigation goes right to the top of the force.

"We also have the case of the deeply flawed investigation into the murder of Donegal Councillor Eddie Fullerton There was no proper examination of the scene, crucial forensic evidence was never examined and key witnesses were not interviewed. Three of the Gardaí, roundly discredited by the Morris Tribunal, were centrally involved in the flawed investigation into Eddie Fullerton's murder.

"Many questions about serious Garda misconduct in all parts of the state remain unanswered. What we need to do now is to take the leap as a society to admit that this is not just a Donegal problem. This is a systemic problem we have to confront aggressively and decisively if we are to solve it, and move on.

"The Irish people deserve to know the full truth about all these matters, and the real truth about policing and justice in this state. The era of impunity and cover-ups must come to an end.

"Sinn Féin wants to see an all-island police service established. In the interim we want policing services North and South that can attract widespread support from, and that are seen as an integral part of, the community as a whole. We want effective policing with local democratic accountability, shaped as a community service and imbued with that human rights ethos. We have an opportunity now to shape the policing of the future for the people of Ireland. It is critical that we get it right."