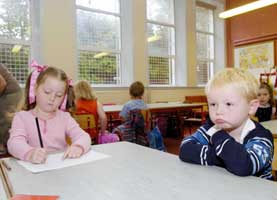 As the new school year begins, Donegal Sinn Féin Councillor Pearse Doherty says the government must address the costs associated of sending children to school, which is a major worry and burden to many parents of low-income families.

"These figures clearly put an end to the myth that education is free," says Doherty. "The fact that a family with four children of schoolgoing age is paying on average of €2,736 per year to send those children to school in September with only a possibility of €320 in assistance from the government depending on means is a disgrace.

"The School Clothing and Footwear Allowances is a means tested allowance for parents that are struggling and entitles parents to €150 for a child attending secondary school and €80 for a child at primary school. There is no doubt that this allowance does not come close to meeting the costs associated w