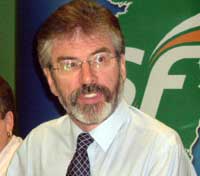 Sinn Féin West Belfast MP Gerry Adams has given a cautious and very qualified welcome to the imminent announcement by the Health Service Executive that it intends establishing an office to tackle the growing problem of suicide. The announcement is part of a ten-year strategy by the Dublin Government on suicide prevention which will be published later this week.

Adams said: "These developments will be judged on their merits, there sources to be made available, and whether they have the necessary all-Ireland approach which is essential to making best use of the human and financial resources available.

"In June, Sinn Féin launched a campaign to persuade the British and Irish Governments to develop an all-island, all-Ireland approach to this issue. Specifically we called for suicide prevention to be made a priority Area for co-operation between the Health Departments in Belfast and Dublin under the auspices of the North South Ministerial Council. I asked Mary Harney, the Tanaiste and Minister of Health in Dublin for a meeting to discuss this matter. Regrettably, this has not yet taken place.

"Following a meeting in June with the British Minister for Health we received a commitment to the creation of a suicide prevention strategy in the north. And we also stressed the importance of constructing a strategy which encompasses the whole island and makes best use of the available resources.

"The strategy for Action on Suicide Prevention‚ which will be published in Dublin on Thursday, will be judged by survivors, relatives of victims and campaigners on its merits and particularly on its ability to deal in a holistic way with this issue. In particular, we will examine closely whether the necessary resources are made available and how this strategy is likely to impact on suicide prevention across the entire island."