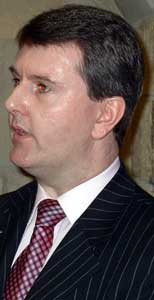 Jeffrey Donaldson - At home with the Colombian "way of doing things"

IN JULY the IRA declared an end to its armed struggle and is about to re-engage with General de Chastelain's decommissioning body. Up and down the country Catholic schools, churches and houses are being attacked and burnt. A mini-civil war rages between loyalist paramilitaries, resulting in violent deaths, demoralising and depressing working-class loyalist districts. Masked gunmen parade the streets in 'shows of strength'; there is rioting, looting and burning on the Shankill. In Lisburn a number of mothers have accused the PSNI of inaction and threaten to picket the homes of drug pushers who are destroying the lives of their children.

Meanwhile, the MP for that area, DUP convert Jeffrey Donaldson, is 5,000 miles away, having cocoa with the Vice President of Colombia, Francisco Santos.

Jeffrey has been joined by members of the South Armagh-based victims group FAIR (Families Acting for Innocent Relatives). They plan to meet senior politicians, security and intelligence experts. Jeffrey's visit is part of a campaign to have the Colombian 3 returned to and imprisoned in Bogota. If the Irish government doesn't send them back then Jeffrey and the DUP have a pretext for not engaging in talks.

FAIR spokesperson Willie Frazer said that they hoped to form a worldwide network of terror victims.

According to Human Rights Watch, there is major collusion between the Colombian Army's 18 brigades and the right-wing paramilitary death squads. Half of the brigades have clear links to paramilitary groups. Jeffrey and Willie have made no mention of plans to meet the victims of the military, despite its involvement in the murder of students, trade unionists and peasants' representatives or families acting for their innocent relatives.

Eight years ago paramilitaries working closely with the military entered the hamlet of San José de Apartadó in northwest Colombia and closed down its market, accusing the people of having fed FARC guerrillas. They picked out four elected members of the hamlet's co-operative, killed them and threw their bodies into a shallow grave.

In response the following Easter the community declared itself a Comunidad de Paz, a Community of Peace, in front of a delegation which included members of Pax Christi International and Dutch parliamentarians. The villagers declared that they would: not participate in the war in direct or indirect form; not carry arms; not manipulate or give information to any of the parties involved in armed conflict; not ask any of the parties to solve conflicts; but that, each one commits him/herself to search for a peaceful solution and to a dialogue for solving the conflict of the country.

In later years, 35 of the villagers were killed: thirty three by the paramilitaries, and two by FARC.

Last February the Colombian military entered the area one morning. They boasted to villagers that they had just killed three guerrillas. They held six families for five days without food, dug two graves and threatened to kill and bury everyone once they received the go-ahead.

Earlier, several miles away, soldiers, presumably of the same unit, abducted the leader of the peace community, Luis Eduardo Guerra (who had lectured in the US about his work for peace), his eleven-year-old son Deiner Andres, and his girlfriend Beyanira Areiza Guzman. They shot the three in a field. The following day other villagers found a shallow grave containing other victims of the army, some of which had been mutilated. The dead were: two-year-old Santiago Tuberquia Munoz; her six-year-old sister, Natalia Andrea; their mother and father, Sandra and Alfonso; and a friend, Alejandro Perez Cuiles. The only military that had been in the area were soldiers of the XVII Brigade's 33 Battalion.

Human Rights Watch appealed to the Colombian Government, the Attorney-General and the Public Prosecutor for the removal of the Brigade but their appeals fell on deaf ears. Three weeks ago the US Government resumed military aid to Colombia which had been suspended following the assassination last year of three trade unionists.

Vice President Francisco Santos, whom Jeffrey is meeting, described the three as terrorists who had opened fire on the army. Colombia accounts for 75% of trade union killings in the world (ninety four in 2004 alone). Later, when it emerged that the three unarmed men had been taken from bed, taken into the street and executed, Santos was called upon to resign but refused and remains in office, drinking cocoa with Jeffrey Donaldson as I write.

President Alvaro Uribe once described human rights NGOs as "political agitators in the service of terrorism, cowards who wrap themselves in the banner of human rights". When I read that I was reminded of that infamous speech by another parliamentarian, Douglas Hogg of the British Home Office. Speaking after meeting senior RUC officers in 1989, Hogg accused some lawyers of being "unduly sympathetic to the cause of the IRA". Four weeks later Pat Finucane was assassinated in what was clearly an act of collusion between state intelligence services and loyalist paramilitaries.

Come to think of it, Colombia must seem like a home from home for the delegation. Jeffrey and Willie have been well used to all that "propaganda" against the "Security Forces" and talk of "shoot-to-kill" and "collusion".

And the fact that there are "victims" on one side and one side only. "Ours".