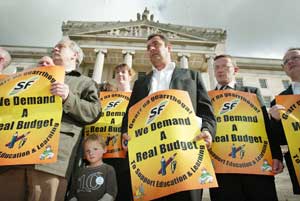 British Government plans to cut the Six Counties education budget by up to £170 million are an attack on schoolchildren, says Sinn Féin's spokesperson on education, West Belfast MLA Michael Ferguson.

According to Ferguson, the cuts will effect school transport, disruption to special needs provision, poor school dinners, no school maintenance programmes and the loss of teaching and non-teaching staff.

"These cuts are an attack on the very foundation of our system of education", he said.

A Sinn Féin protest against Education underfunding will be held this Saturday in Belfast at 9am outside the Holiday Inn Hotel on Ormeau Avenue, where British Minister Angela Smith will be addressing the NILGA National Women's Conference.