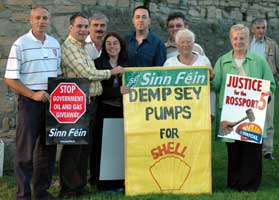 The Rossport 5 issue has continued to gather more public profile following the appearance of the wives of the five men on the Late Late Show on RTÉ last Friday night. Protests have continued in various parts of the country in Dublin, Belfast, Wicklow, Waterford, Erris in Mayo and many other places.

The buildup continues for a day-long blockade of Shell's distribution depot at Clontarf next Saturday. There are also more protests planned for the following week nationwide, proving (if any proof was needed) that the issue hasn't gone away and is not likely to do so.

Increasing efforts are being made to publicise the issue in Norway, the home of Statoil, where a general election is scheduled to take place on the 12th of this month. Meanwhile, Shell has gone on a charm offensive in Mayo designed to mislead the public and muddy the waters.

Maureen McGrath, Caitlín Ní Sheighin, Mary Corduff, Maureen McGrath and Aggie Philbin — the wives of Philip McGrath, Mícheál Ó Seighin, Willie Corduff, Vincent McGrath and Brendan Philbin, respectively — appeared on the Late Late Show to give a personal account of how they have been affected.

Also on the show were Bríd McGarry, a local landowner opposing the Shell/Statoil pipeline project; Dr Mark Garavan, a spokesperson for the Shell-to-Sea campaign; and a representative of Shell with a polished English public school accent. The women in question gave a harrowing account of how the imprisonment of their husbands has borne upon them and they were unequivocal in identifying Shell/Statoil as the culprits. They were adamant that their husbands remain committed to facing Shell down.

Despite Shell's high-profile PR campaign saying that the multinational company wishes to find a resolution to the imprisonment of the Rossport 5, it has consistently refused to take the necessary measure of withdrawing its injunction against the five men. Its PR campaign is an obvious red herring designed to misinform the public and create the impression that it wants a resolution, but that the five men are unreasonable.

Effectively, Shell wants the five men to purge their contempt and give an undertaking that they will not interfere with the building of the pipeline, which means it wants to take away the right of the men to protest against a dubious, dangerous and hazardous project on their own land.

If anything can sum up the inadequate and unrepresentative role of Labour leader Pat Rabbitte, himself a native of County Mayo, it has to be his mealy-mouthed remarks where he said that the Rossport issue "is bordering on becoming a national disgrace". This was regardless of the fact that the deal negotiated by the Dublin Government, the imprisonment of the Rossport 5 and the callous disregard shown by Shell and Statoil to the safety and well-being of local residents has long been a disgrace.

Despite two months of the imprisonment of the Rossport 5 and the Shell-to-Sea campaign, he has been mute up until now. His latest offer in resolving the impasse of the imprisonment of the five men consists of the five men purging their contempt while Shell would simultaneously rescind the injunction. However, this is already the position that the Rossport 5 and their families have adopted and one must ask if Rabbitte has kept himself sufficiently informed on events.

In any case, this proposal has already been rejected by Shell.

Last Friday, a Sinn Féin delegation from the Stormont Assembly team, consisting of Philip McGuigan MLA (North Antrim), Francie Brolly MLA (East Derry) and other Sinn Féin representatives, visited the five men in Cloverhill Prison to hear from the men themselves about their current situation. The Sinn Féin delegation made it clear that their support for the protest is unequivocal and that they will offer any assistance possible.

McGuigan said: "The issue of the Rossport 5 and the way that the Irish Government has sold off one of Ireland's most important natural resources is one that affects everyone living on this island.

"This visit is an opportunity to express solidarity with the men and their families and all of those who have been campaigning for their freedom and to reiterate Sinn Féin's call for their immediate release.

"Protection of valuable Irish energy resources from exploitation is essential if we are to guarantee the long-term sustainability and stability of the emerging all-Ireland energy market."

Seven Independent TDs have also called for the government and on Minister Noel Dempsey in particular, to intervene in a positive and pro-active manner in order to secure the release of the Rossport 5.

Following their visit to the five men in Cloverhill Prison, Philip McGuigan MLA, Francie Brolly MLA and Cllr Daithí McKay (Ballymoney) visited the families of the five men and the people of Rossport the following day in order to convey Sinn Féin's solidarity.

"We wanted to see for ourselves what the situation is there at the moment and show our support for the dignified stance of the men and their families have taken since this began," said McGuigan.

"It was obvious after visiting the site that the people in Rossport have very real concerns about the health and safety if this gas pipe is allowed to progress.

"Meanwhile, this Irish government is giving away a natural Irish resource with no economic benefit to the Irish people."

Protests in Belfast, Wicklow and Waterford

Ógra Shinn Féin held a protest at the gates of City Hall in Belfast last Saturday to highlight the Rossport 5 issue and the Shell-to-Sea campaign. A significant crowd participated, attracting the attention and curiosity of passers-by, and many information leaflets were distributed.

In Wicklow, Sinn Féin organised series of 'flying column' protests against Shell and Statoil stations in various parts of the county. These stations were picked at random and the protest involved protestors moving pickets from station to station at different times. These pickets were well observed and strong support was expressed by members of the public.

On Friday 2 September, a protest was held at government buildings in Waterford City. Various political groups, including Sinn Féin, took part during the hour-long protest. Again, these were supported by the public.

The Norwegian general election is scheduled to take place on the 12th of this month and campaigners are currently making major efforts in publicising this case to the Norwegian electorate. This story has received considerable media attention in Norway and the picket at the Norwegian Embassy last week received coverage in most Norwegian media outlets — broadcast and print media.

Blockade of Clontarf Shell Depot, starting at 8am in the morning. Clontarf Dart Station