In Brief - Ógra and Commemorations 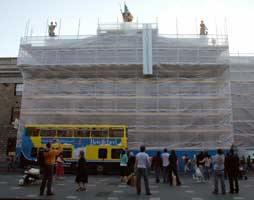 On Sunday evening, young republicans from Ógra Shinn Féin dropped a banner from the scaffold that currently surrounds the GPO in Dublin highlighting the Save 16 Moore Street Campaign.

The Gardaí, in a change to their usual historical role, removed these republicans from the scaffold rather than hang them from it. Both Ógra activists who climbed the scaffold were arrested for apparently 'displaying offensive material' (how easily some people are offended) and trespassing. The activists were held in Store Street for over three-and-a-half hours before being released, but not before a visit from the friendly neighbourhood Special Branch men. Minister Dempsey has indicated that the building will now be preserved, but the Save 16 Moore Street Campaign will continue until this important monument in Ireland's revolutionary history is converted into a museum for the people of Ireland.

Waterford Ógra Shinn Féin will host a national weekend of events on Friday 16 to Sunday 18 September on the theme of Irish republican history, the present and the future.

The weekend will kick off with the story of the great escape of 38 IRA POWs from what was described as 'the most secure prison in Western Europe', Long Kesh. The talk will be relived by Bobby Storey, Gerry Kelly and Brendan 'Bik' McFarlane, who all had their part to play in the escape. The escape took place just two years after ten Irish republicans died on Hunger Strike in Long Kesh to defeat the British attempts at criminalisation. The escape gave the Republican Movement a morale booster while the British were left with red faces.

The Waterford weekend will continue that night with a social night of Craic agus Ceol when Willie Byrne of Dublin Ógra Shinn Féin takes centre stage with his guitar.

On Saturday a Make Partition History rally is planned for Waterford; everyone is urged to bring their county colours along with them and make the call loud and clear for Irish Freedom. This will be followed by public relations training in the Waterford Sinn Féin Office.

The next event on the calendar is a white-line protest on the bridge which borders Counties Kilkenny and Waterford. The purpose of the protest is to call for an end of the imprisonment of IRA prisoners who remain imprisoned, even though the IRA has ordered an end to this phase of armed conflict.

On Sunday a tour will be given on the sights and scenes around Waterford City.

The cost for the weekend will be €8 for all Ógra activists and €10 for all others who wish to attend.

John Kelly, Chairperson of Strabane National Graves is expecting local republicans to turn out in large numbers at events organised this weekend to commemorate all those from the West Tyrone area who have given their lives in the cause of Irish freedom.

The events kick off on Friday night 9 September with the Cairde Annual Quiz Night in Sigersons and as ever there will be the sporting competition for the Jim McAleer Shield. On Saturday at 1pm Ógra Shinn Féin is organising a Youth for Truth protest on the issue of Collusion at Strabane Barracks. At 2.30pm on Saturday the Cairde Annual Gaelic seven-a-side tournament takes place and with rumours that Tyrone scouts will be talent spotting, there will undoubtedly be great competition for places on one of the sides.

The annual march and commemoration on Sunday is the culmination of the weekend's events. People are being asked to assemble at Ballycolman Shops at 2pm and the parade, led by three bands, will make its way to the Republican Plot at Strabane Cemetery.