The invisible hand of sectarianism 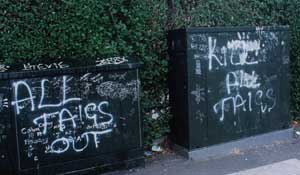 'Kill all Taigs' is the message to nationalists

British classical economist Adam Smith saw the creation of wealth as dependent upon an invisible hand, a mysterious autonomous force born out of individual choice, progression of the division of labour and a free market. The mystery at the heart of Smith's model was rigorously exposed by Karl Marx, who put power relations and human agency at the heart of his analysis.

But despite the demonstrated inadequacy of Smith's understanding, his ideas remain revered to the present day because they provide a convenient ideological cover for the fundamentally exploitative nature of capitalism.

You might reasonably be asking the relevance of Smith and Marx outside the well-rehearsed debates between the old left and right. But the adherence to mystery over analysis remains at the heart of many of the issues we are facing today.

A clear example is the current tragedy of New Orleans, where the inability of the world's only superpower to intervene to save its own citizens is underpinned by an ideological adherence to individualism and the sanctity of private property.

Instead of commandeering the necessities of life and shelter, the state became pre-occupied with identifying people desperate for water, food and basic necessities as looters. And now we are faced with the ridiculous obscenity of thousands of heavily-armed US troops patrolling deserted streets.

As one astute commentator put it, if America could shoot New Orleans into reconstruction it would be ready for Mardi Gras by February.

But just before we all start to feel smug at the expense of someone else's tragedy, it's worth remembering we have our own ideological brick walls in desperate need of urgent demolition. And none more so than the dominant discourse on the nature of sectarianism in the Six Counties.

Last week, a modest report conducted by Dr Neil Jarman of the Institute for Conflict Research led to shock and awe in the media, as commentators came to grips with the reality that sectarianism had reached a new high despite eleven years of the Peace Process.

The report had been commissioned by the NIO's OFMDFM and is based upon statistics available from the PSNI, Housing Executive, lifestyle surveys and other research.

According to the report, levels of sectarian violence are currently higher than before the cessations, with an average of 1,378 people a year seeking rehousing because of sectarian, paramilitary and racist intimidation. Around 500 workers a year make formal complaints concerning sectarian discrimination in employment.

Jarman points out that of the 37 peace walls across the North, none have been removed since the cessations and 18 have actually been reinforced.

It was assumed all this would stop with the Peace Process, Jarman told the media, it hasn't, yet it gets very little attention.

The problem of sectarian violence has been allowed to persist with little consistent publicity, sustained opposition or structured policy responses, said Jarman.

Of course, for northern nationalists the rise of sectarian attacks against Catholic homes, places of worship and businesses, not only comes as no surprise, but also was widely anticipated during community consultation about the likely impact of the IRA cessation over a decade ago.

This is because, at odds with the dominant discourse, most ordinary nationalists have never bought into the notion that unionist violence was simply a reaction to the IRA campaign. Unionist violence secured partition and had been wedded to the operation of the Six-County state ever since. This has been the reality northern nationalists have lived through and with for over 80 years.

But of course, recognition of that reality is far too dangerous for British occupation and the agencies of state within the Six Counties. The true nature and operation of sectarianism must remain hidden and rendered as mysterious as the invisible hand. There are a number of key ways in which this process of mystification is achieved. The first involves definition and a second is the collation of information.

Sectarianism as a category lends itself to mystery and can be used to hide as much as reveal the nature of what is being played out on our streets, outside our homes and at our places of work and worship.

A liberal position identifies sectarianism as immoral in whatever form it takes. In terms of morality, the religious or ethnic identity of the perpetrator or the victim is of no interest; indeed to demand this information is tantamount to further sectarianising the issue.

Of course, for those in whose interests it is to suppress the truth about the operation of the Six-County state, this is manna from heaven. It not only refuses to reveal the nature of sectarianism, the demand for revelation is in itself sectarian. It's clearly a case of Ignorance is Strength, or more accurately in this particular context, Ignorance is Maintaining Power.

The media achieves this sleight of hand by sometimes adopting the liberal method of mystification. By neutralising attacks, by reporting them simply as sectarian, the reader is left to guess the truth by identifying the ethnicity of the names of the individuals involved or the area in which the attack took place. On the other hand, if more Catholics are being attacked then Protestants, in-depth interviews with Protestant victims creates an illusion of balance.

By its very nature, the media atomises the operation of sectarianism into the experiences of individuals captured at a specific moment. It provides a series of largely disconnected snap shots.

A systematic collation of media coverage will provide some sense of a collective dynamic process but it is far from adequate. The media can only hint at the way in which individual acts of sectarian violence can act as a mechanism of collective intimidation and, in the context of a sectarian state, reinforce the status quo.

Consideration of sectarianism in relation to established power relations within a state fashioned upon a Protestant parliament for a Protestant people has led some commentators to draw parallels with racism.

From this perspective, anti-Catholic sectarianism is akin to anti-Irish racism. And indeed, there is some mileage in identifying these parallels; after all, religious identification in the North often implies a racial and political allegiance as well. Taig, Fenian and Paddy are not distinct categories.

While dominant notions of sectarianism lend themselves to mystification, the single most important aspect of this wilful oblivion is the failure of statutory agencies to collate information and lack of any independent monitoring mechanism.

It's an appalling indictment of the state that the PSNI has only been recently compelled to keep statistical information concerning sectarian attacks. While some individual district command units did collect figures for sectarian attacks, the PSNI only began doing so systematically across the Six Counties since last September.

Of course, the PSNI is not a neutral mechanism through which to determine sectarian definitions and statistical trends. Historically, policing in the North has been highly politicised and the PSNI's predecessors acted not just as agents of the state but as agents of a sectarian Orange state.

The RUC were notoriously reluctant to identify unionist violence against nationalists as sectarian and if the recent killing of a North Belfast teenager and attacks on families in Ahoghill are anything to go by, the PSNI can be equally reluctant.

It is becoming increasingly clear to republicans that notions of sectarianism can obscure as much as they reveal. In the current situation, monitoring unionist violence, a large extent of which is sectarian, can perhaps offer greater clarity in understanding the dynamics presently being played out on our streets. Perhaps it is not the invisible hand but the Red Hand of Ulster we need to be monitoring.