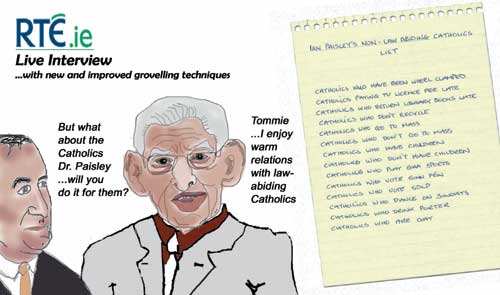 Over the weekend in the Six Counties, nationalists in the North Antrim town of Cushendall were attacked by members of the PSNI, using batons and CS Spray.

A number of people were injured, including the Sinn Féin Chair of Moyle District Council, Oliver McMullan.

The general media description of the incident, however, was to say that the PSNI were the victims of a mob attack.

The riots, which were orchestrated by the UVF, saw loyalists burn vehicles and attack the PSNI with petrol bombs.

Unlike Ardoyne on 12 July, when nationalists rioted, the PSNI delayed using water cannon and refrained from firing plastic bullets. This approach highlights the sectarian bias of policing in the Six Counties.

The BBC, reporting the Woodvale rioting, said the "police were involved in clashes with loyalists" -- no mention of mobs attacking the 'police' here, obviously, despite the fact that this was exactly what was happening. This BBC commentary demonstrates the benign view of unionist violence that exists within the media and the unionist political establishment.

Over the summer, unionist paramilitaries launched an orchestrated campaign of violence against nationalists throughout North Antrim, Belfast, Derry and County Down.

This violence is very damaging. Lives are at risk and people's homes and property are being destroyed, yet the silence and lack of political response from the leadership of unionism is deafening.

It is about time that all unionist political leaders showed leadership on the issue of unionist sectarianism.

There is a political vacuum at the moment that is being filled, as it always is, by unionist sectarian violence. The failure to engage in the dialogue required to get the political process back on track is a failure of leadership.

The public message seems to be that there is an acceptable level of violence, particularly if it is only nationalists and working-class unionist communities that are suffering.

The objective of anti-nationalist violence is that the inequality upon which the Six-County state was formed must be reinforced at every turn.

And the benign reporting of unionist violence by the media only serves to reinforce that unequal status quo.