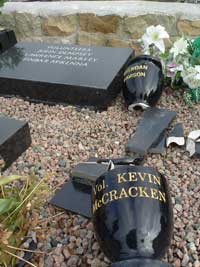 Sinn Féin Councillor Paul Maskey has condemned the vandalism and desecration of republican graves at Milltown Cemetery over the weekend.

Cemetery staff found memorial plaques and family tributes broken and strewn across the graves of IRA Volunteers buried in the plot.

Maskey said it was "an attack on Ireland's patriot dead", and had come as a shock to the families and friends of those buried there.

"Although it is unclear if the attacks were the work of locals or loyalists, republicans will be determined to restore the plot to its former condition as a tribute to the memory of those who rest there," he pledged.

Sinn Féin MLA Philip McGuigan has described the erection of a number of A4 posters in the village of Ahoghill making threats against Catholics as akin to something expected from the Klu Klux Klan.

The posters threaten against what the authors term Republican, Nationalist and Roman influences in the community.

"It is completely unacceptable that the perpetrators of the ethnic cleansing of Ahoghill should attempt to find excuses for themselves and their actions," said McGuigan.

Hartley accused the protestors of bringing hardship to parents bringing children to school giving the timing of the picket, which was staged on the Springfield Road at Dunboyne Avenue, near the Whiterock Orange Hall.

The picket, which involved no more than 20 people, some of whom claimed to be members of the Orange Order, lasted for over an hour and brought traffic chaos to West Belfast.

"The chaos created this morning was designed to heighten tensions in the Springfield Road and is imposing huge stress on nationalist families living along the road," he said.

"The Orange Order are trying to overturn the decision of the Parades Commission to re-route the Whiterock Parade instead of accepting the generous compromise route offered by the Springfield Residents for the march to go, unchallenged, through the old Mackies site," said Hartley.