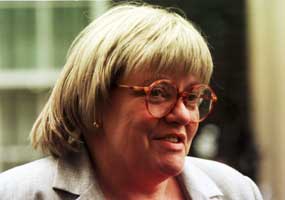 Mo Mowlam, who died last week, will be remembered as an unorthodox and unconventional British Direct Ruler during her term in the Six Counties from 1997 to 1999. A senior British Labour politician Mowlam was involved in the negotiations that resulted in the Good Friday Agreement in 1998.

She was unusual in that she defied the usual compliment of stuffy, pompous, condescending and unsympathetic governors typical of Six-County administrators dispatched by Downing Street to the North of Ireland over three decades. It was probably inevitable that her style would upset the notoriously delicate sensitivities of senior unionist politicians.

Mo Mowlam came from a working-class background in Watford just outside London. She performed well academically attaining a PhD and worked as a university lecturer until 1987 when she decided to enter the political arena.

In the election of that year she was elected MP for Redcar, a deprived working class town in the de-industrialised rustbelt of Northeast England. She served as an opposition MP for the next ten years.

Following Labour's impressive election victory over the Tories in 1997, bringing the party to power for the first time in 18 years, she was appointed Secretary of State for Northern Ireland in May 1997.

Her appointment followed a period in which the IRA had ended its cessation of military operations in February 1996 in the face of Tory Government intransigence, the denial of democracy in Ireland and a failure to engage with the Peace Process. Following IRA attacks on the British mainland, the coming to power of a new British Government and Bertie Ahern's election victory in June 1997, the IRA resumed its cessation in July 1997.

During the Good Friday Agreement negotiations, the unionist political leadership's obstructionist antics resulted in their deteriorating relationship with Mowlam.

At the subsequent Labour party conference, it was clear that she was more popular that Tony Blair, causing him obvious concern. In July 1999, a telephone conversation between Mowlam and Sinn Féin's Chief Negotiator Martin McGuinness was bugged, taped and leaked to the media. While the conversation was innocuous enough, the fact that Mowlam's demeanour was consistent with her usual friendly and informal manner, was used against her and predictably led to unionist calls for her resignation.

The media questioned Mowlam's judgement rather than why and by whom her phone had been tapped. Later the same year Blair replaced her with Peter Mandelson and she was demoted to Cabinet Office Minister and Chancellor for the Duchy of Lancaster. Shortly afterwards she announced her intention to retire from politics.

Commenting on the death Mo Mowlam Sinn Féin's Martin McGuinness said:"Mo Mowlam brought a unique energy to the search for a political settlement when she was first appointed after the 1997 British general election. She was an obvious departure from previous British Secretaries of State. "She played a crucial role in the negotiations which led to the Good Friday Agreement and it is that Agreement which will be remembered as her political legacy here.

"We were of course always conscious of the fact that she was a British Minister and was at the mercy of the securocrats within the NIO system. There was of course occasions when we clashed, most notably when she caved into Orange Order threats and forced an Orange march along the Garvaghy Road in Portadown and when she authorised the bugging of a car used by Gerry Adams and myself during the negotiations.

"However, Mo Mowlam will be remembered fondly by the vast majority of Irish people and I would extend my thoughts and sympathies to her husband John and the rest of her family at this time."