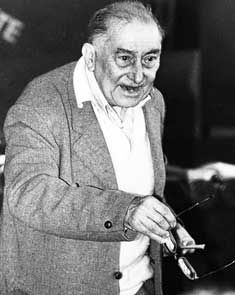 The 17th Desmond Greaves Summer School takes place this weekend in the Irish Labour History Museum in Beggars Bush. Greaves is well known to republicans as the author of two of the classic studies of Irish political history, The Life and Times of James Connolly and Liam Mellows and the Irish Revolution, the latter recently republished by An Glór Gafa.

The school serves as a forum for the radical Irish left to seriously engage and has a well-deserved reputation for thoughtful and informative discussions on the North and Europe in particular.

The Friday evening session opens at 7.30pm with one of the more attractive topics. Eugene McCartan, General Secretary of the Communist Party of Ireland, will speak on Prospects for the Left in Ireland. It is a timely choice. Over the last three to four months a number of contributors have engaged in a lengthy debate through the pages of An Phoblacht over the direction of the party in the 26 Counties and the attitude that must be adopted to other parties, including Labour.

Mick O'Reilly of the ATGWU has publicly called for a realignment of the left in Irish politics as an alternative to Labour's strategy of coalition with Fine Gael and there are many in Labour and the Greens who are fearful of a drift to the right. It is a little disappointing that there are not a number of speakers from a variety of parties and organisations but McCartan's contribution, as a long-time campaigner with a wealth of experience of working with other left wing groups, will be very worthwhile.

In the aftermath of the IRA's recent statement, Owen Bennett, author of The Story of the Irish Peace Process, looks at the current position of the Peace Process and the implications for republicans. Starting at 11am on the Sunday, it is obviously a very live topic with republicans themselves re-analysing the political landscape, changed irrevocably by the IRA's initiative.

The two afternoon sessions focus on Greaves as an historian and individual and are perhaps curious choices by the organisers. The School tends not to attract younger people and is to an extent somewhat distant from the current generation of political activists. These discussions are unlikely to widen that audience, but will no doubt be attractive to the School's regulars.