The Hunger Strike - 25 years on 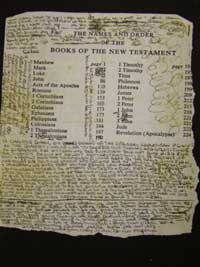 Paul McVeigh's letter to his mother smuggled from the H-Blocks

I came across this letter a few years back; in fact, some time after my mother Rosaleen had died. Written on prison issue toilet paper and smuggled from the H-Blocks in the summer of 1978, she had kept it in a family photo album. A cherished memento of the Blanket Protest in which her son and my brother, Paul had participated.

She's gone now, dead for a few years. The protest is long over and the Hunger Strikers — Bobby, Francie, Raymond, Patsy, Joe, Martin, Kieran, Kevin, Tom and Mickey are in their graves almost 25 years. It seems no more than a heartbeat ago, not a quarter of a century. But that's exactly what it will be next year, the 25th anniversary. It's hard to believe.

On the 20th anniversary we celebrated their lives and the heroism of that period the length and breath of Ireland. We did them proud with the many thousands of commemorative events. We brought them back to life for a generation that may not have known Bobby and his comrades beyond a footnote in the official history books.

And what about next year? Well, it is time to start planning now. Later this year a National 1980/'81 Committee will be formed to bring forward a programme of activities. Every republican in every city, town, village and townland should be thinking now about organising a commemorative event. Local '80/'81 committees should be reformed now, not next year. Where none existed new ones should be organised.

Let us write books, poetry and pamphlets, produce films and exhibitions, paint murals and erect monuments, hold talks and discussions, tell each other stories of their comradeship and bravery.

Let us reclaim and renew the wonderful spirit of the Hunger Strikers for another generation. Let the skylark sing his song.

As you may know we have pets in our cells and the place is definitely a dump now.

The maggots are coming from the waste food lying in the cell and they really are a nuisance. I'm not fond of them myself and in fact they are an awful lot of trouble because if you don't watch them they would be all over you and on the bedding. They are ghastly things to have in the cell but we are used to them now and just keep our eyes opened for them coming anywhere near the bedding.

There's a heap of flies also, but not as many and they are not as bad for us on this protest, but we'll stick it out and wait for our victory.

Things are really good and as you know publicity is marvellous for us so we wait for the big breakthrough and for the NIO to give us our demands.

We are into three blocks now so the numbers get greater and we can really do the damage and make it felt by the authorities. As far as the process goes we are still at it and the cells are getting plastered with everything and anything. It will go on for longer so it will get worse...

If you could picture a derelict house with all the dirt and smell you would have a good picture of our cells. Massive tea-stains, blue mould food, dust, and our latest one is holes in the walls the size of your fist right into the next cell. It's great and you can now talk and see the others as if the walls weren't there!

The place is wrecked and will be wrecked more with the future months if we are still here, so no matter where we go. Mammy, we're really hard to beat and we should see our status in the future.