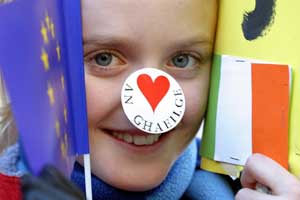 The revival of Irish is a prominent aspect of Sinn Féin's vision of a united Ireland based on equality, justice and peace. Here Feargal Mac Ionnrachtaigh and Ciarán Mac Giolla Bhéin highlight the importance of language to republican objectives. They also set out radical and practical ways of re-focusing all republican activists on the need to elevate cultural revival to the centre of our struggle.

Creating a bilingual society is a daunting challenge but building a new Ireland means responding positively to such challenges.

The cultural revival movement was the crucial inspirational factor for the Irish revolution in the last century. It is now vital that language revival be utilised as a central component in the project of nation building.

Centuries of cultural and economic oppression in Ireland have ensured the success of the British political project of domination culminating in a process of Anglicisation which ultimately led to our failure to restore Irish as a general spoken means of communication.

The fact that Ireland is one of the few Western European countries to have been colonised in recent historical times has negatively impacted on Irish national pride. This in turn has paralysed political and cultural debate, especially since the formation of the 26-County state, where disastrous state revival policies has seen the reduction of native speakers plummet from one in five of the population in 1922 to one in 120 by the year 2002.

Recent surveys of public attitudes amongst Irish people towards Irish combine extensive support for the language with widespread inability or reluctance to learn or speak it. This clearly reflects Irish-language Journalist Tomás Mac Siomóin's view that a 'cultural schizophrenia' exists illustrating the enduring legacy of British colonisation.

The consequences of this legacy have created a false sense of identity that clamours for recognition as a distinct nationality and relegates the language to that of a symbolic icon. In the words of Historian JJ Lee: "There is in present circumstances, no substitute for the language. However, exhilarating Gaelic hurling and football may be at their best, however exuberant the beat of the bodhrán, these are only details in the overall design of a distinctive culture. The language is now, for practical purposes, the design."

While cultural regeneration made possible the 1916 Rising, the publication of the Proclamation in English only underlined the marginality of language revival to the revolutionary programme at a time when one in five of the Irish people were native speakers.

In deviating from the broader European independence movements of that era, language revival in Ireland has remained on the margins of subsequent political struggles. The current process of nation building requires a detailed revolutionary strategy that involves the construction of a decolonised identity to which the repossession of the Irish language is central. In the words of the late republican and language activist, Mairtín Ó Cadhain: "The Irish language is the re-conquest of Ireland -- the re-conquest of Ireland is the salvation of Irish."

Where are we now?

Successive Irish Governments have done more harm than good to the fortunes of Irish since 1922. Revival policies were reduced to the imposition of Irish in all state schools coupled with poor teaching methods leading to widespread resentment of the language.

The substantial decrease of native Irish speakers and subsequent geographical retreat of the Gaeltacht regions is indicative of a continuous policy of economic neglect by various Irish administrations.

On a more positive note, the Irish Government seems to have abandoned the policy of allowing the language to die by stealth. It has appointed a Minister with specific responsibility for the Gaeltacht regions, Éamon Ó Cuív, and passed the Official Languages Act in 2003 ensuring that every publication made by a Governmental body must be published in both official languages. In addition, it successfully proposed that Irish be afforded official and working language status within the European Union, although it is important to note that this only came about after a sustained campaign by Irish language groups.

In the Six Counties the attitudes of the British and unionist establishment has been characterised by discrimination and demonisation of Irish. While the language received its first formal recognition with the signing of the Good Friday Agreement and the British Government's ratification of the European Charter for Regional and Minority Languages, its failure to fulfil commitments made, underscores its continued adherence to a colonial agenda.

Despite this, Sinn Féin has successfully held the British Government to account on a range of commitments made in relation to Irish. Sinn Féin was instrumental in the establishment of the cross-border language body Foras na Gaeilge and the successful fight to restore it's budget. Martin McGuinness, as Minister for Education, established Iontaobhas na Gaelscolaíochta (Irish-Medium Schools trust) and Comhairle na Gaelscolaíochta (Irish-Medium Schools Council) which have revolutionised the development of the Irish medium sector in the North.

What is to be done?

While recognising the significance of achieving status for the language in the EU, this must not be viewed as a substitute for language revival at home. Similarly, the successful growth of the Irish-medium education sector cannot be overestimated. This was recently emphasised by republican ex-prisoner and Irish-language activist, Séanna Walsh: "We have worked tirelessly to ensure that Irish-medium education is put on a firm foundation and built upon throughout the North. It is now time to look at all the adults across the country who would like to be able to speak it but haven't got around to it."

Greater emphasis must be placed on the protection and promotion of the language amongst the Irish people. The priority for all language revivalists must be to empower and inspire the learning and speaking of Irish.

Although Sinn Féin's record on Irish language issues is commendable, especially when compared to the indifferent approach of all other nationalist parties, its stated aim of, "creating a bilingual society at every level", is dependent on the creation of a bilingual movement that can pursue this objective.

To transform the fortunes of Irish and propel it from the margins of republican objectives, it is imperative that all activists are educated and re-focused on its centrality to the building of an Ireland of Equals. Sinn Féin can thus develop from being a party which campaigns on Irish language issues to a party that epitomises the struggle for repossession of the language.

In developing a programme to Gaelicise the movement we need look no further than the example of Herri Batasuna in the Basque Country, who introduced a radical programme of language acquisition within their movement. In 1991, Batasuna successfully implemented a five-year plan that involved all party members learning to write and speak their native language, Euskara. The leadership shown by Batasuna on this matter has become the catalyst for a resurgence of national culture and identity amongst the Basque people.

In focusing the Republican Movement on the indispensability of language revival to the project of nation building we can directly influence the national consciousness and inspire the Irish people to reclaim their sense of national identity regardless of age, class, creed or political outlook.

A comprehensive process of de-colonialisation demands that the language transcends its current symbolic status in order to achieve proper recognition and full rights for all its users. The magnitude of the challenge to create a bilingual Ireland necessitates that the Irish people re-evaluate and ultimately re-define their sense of Irishness. By providing positive leadership on this issue republicans can make this vision realisable and become the driving force in the process of building a new Ireland.

Just as the revival efforts of the Gaelic League provided the dynamic for the Irish revolution in the last century, a rejuvenated and determined Republican Movement can positively contribute to reinforcing our national identity with a new sense of dignity that can characterise our struggle in the new millennium.