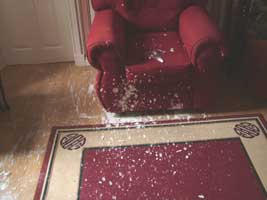 Pat McCaughey's house in Ahoghill, damaged by paint bombs. The McCaugheys have vowed to leave their home after recent attacks

PSNI Deputy Chief Paul Leighton has been forced to "retract" a contentious statement he made last week and confirm that all the recent attacks on nationalists and Catholics in the County Antrim village of Ahoghill are in fact, sectarian.

The senior PSNI member provoked widespread outrage after he suggested that "disputes between neighbours" were partly responsible for the ongoing campaign of unionist violence throughout the North Antrim area.

Leighton made the comments as he visited Ahoghill village on Wednesday 17 August — just hours after yet another Catholic couple were forced to leave their home due to unionist intimidation. Speaking to the media on the same day the PSNI boss claimed sectarianism was only "an element" of the ongoing campaign against nationalist residents in the area and that "people not getting on with each other" was also a factor. Leighton went on to state that he did not agree with suggestions that unionist paramilitaries were engaged in a campaign of ethnic cleansing, remarking that things were "much more serious".

However, in a letter sent to a nationalist Ballymena councillor this week, Leighton seems to have suddenly reversed his position: "There is no question the attacks are all of a sectarian nature and only in some do other, lesser factors, feature," Leighton wrote. He went on to grudgingly admit that sectarianism "is still the fundamental issue in the Ahoghill attacks, as it is in other attacks in Ballymena".

Leighton's retraction came to light on Saturday 20 August as the PSNI prepared to mount a massive operation in the neighbouring County Antrim village of Rasharkin. More than 1,200 unionist marchers and 46 bands, many with UDA and UVF connections, gathered to parade through the predominately nationalist town only hours after a number of nationalist businesses and homes in the area were attacked by unionist paramilitaries.