The Bolivarian Republic of Venezuela 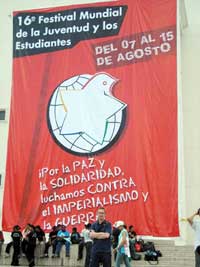 The term 'Bolivarian' comes from the great South American liberator Simon Bolivar, who attained the independence of a number of South American countries from Spanish colonial rule.

Hugo Chavez views himself and Venezuela as the next illustrious South American liberation. Chavez's ultimate goal is to unfetter the poverty-stricken people of South America from the chains of disease, hunger, and economic oppression. For this to be achieved, the economic link and unequal trading dependency with the United States has to be broken.

Hugo Chavez's current presidency was not the first time that he tried to take power. In the early '90s, while serving as a Colonel in the Venezuelan Army, Chavez led an attempted Coup d'Etat, which ultimately failed and for which he was imprisoned for two years. Following his release from prison he stood in the presidential election as a single-issue candidate. He wanted to use the vast amounts of natural resources of the country for the benefit of the people. On this platform, he was elected.

The first thing Chavez did was to take control of the state-owned oil company which controlled Venezuela's oil reserves, the second largest in the world. For years this company had acted like a private company, simply acquiring more assets, while contributing little or nothing to the Venezuelan Exchequer. The move made Chavez incredibly unpopular with the wealthy elite of Venezuelan society, leading to an attempted coup, which failed after two days. This coup was backed by the United States, as was the following oil strike, which crippled the economy of the country and brought tremendous hardship to ordinary people.

Chavez, during a charismatic and energised speech, revealed that "...one day during the strike, I was visiting one of the slums, and I came across this house, and I went inside to visit the people. The woman of the house was cooking dinner for her family. They had no gas for which to cook this dinner, so the woman had broken up her bed in order to light a fire. She grabbed me by the jacket of my suit, and shook me, telling me that I was not to give in, that she would burn her house if she had to, to feed her family. She said that I was the President and that I do not give in."

The strike ultimately collapsed with the promise of a referendum on the future of the Chavez presidency. Chavez went on to win the referendum with a massive 80% of the vote, which subsequently led him to introduce the social projects that he wanted to embark on at the start of his presidency.

Chavez introduced universal healthcare. We went to see one of these health centres, which was staffed by a Cuban doctor. She had 400 patients, and was on call 24 hours a day, seven days a week. There are some 15,000 Cuban doctors in Venezuela, with thousands of young Venezuelans in Cuba training to be doctors. We also visited several education centres, where illiteracy is being eradicated. We also saw a nutrition centre, where the government bulk-buys basic foods like rice, beans and cooking oil, which they then distribute to the centres, so the poorest of people can get the most basic food cheaply. Also, the people who cannot afford food can get a free meal.

The Venezuelan Revolution is not a revolution from the top down, but a revolution led from the bottom up. Local communities are controlled by the local people, and their needs met by the government. Ordinary Venezuelans have a clear understanding of the politics that made them poor — neo-colonialism, the IMF and the World Bank.

At the speech we attended, Chavez announced he was setting up publishing houses that would produce 20 million books a year, which would be given out free.

In order to protect the revolution from attack Chavez has armed the Venezuelan people. The reserve army alone stands at some two million soldiers. Many factories, towns and universities now have trained militias. Chavez has also prepared the people for a war. While in Venezuela I got a clear sense that the country is preparing for war. Talking to some Venezuelans they seem to think it was only a matter of time. Some people think the war will be with Colombia backed with military aid from the US others think it will be in the from of another coup led by the business elite and the private television companies. However, more think it will be directly with the US.