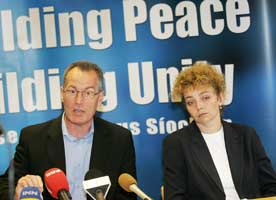 The dossier details attacks carried out by unionist paramilitary gangs in the period since June 2005. Although by no means comprehensive, due to the fact that so many attacks go unreported it offers a chilling picture of orchestrated sectarian intimidation, particularly in areas where there is a vulnerable nationalist minority.

Throughout this period it is very clearly established that unionist paramilitaries have been engaged in ongoing sectarian attacks on nationalists, their homes and businesses, on Catholic churches and schools, in addition to the well-publicised feud between the UVF and LVF. The dossier will be sent to the Irish and British Governments.

The response from unionist politicians to the ongoing paramilitary campaign has been typically mute. Continuing to hide behind anti-republican rhetoric even after the historic statement from the IRA committing that organisation to peaceful and democratic programmes in the future, they refuse to acknowledge the reality that the biggest threat to the process comes from violent unionism.

At a time when the DUP in particular are continuing to ignore Sinn Féin's democratic mandate and are stalling efforts to put the political process back on track, both they and the UUP sit on forums and commissions with the leaderships of the unionist paramilitary gangs.

"This report paints a picture of a sustained and organised campaign of violence and intimidation. It shows very clearly where the threat to the Peace Process lies.

"This report should also act as a wake up call to unionist political leaders and in particular to the DUP.

"Both of the main unionist parties and the Orange Order sit on forums and commissions with the leaderships of the UVF and UDA. They undoubtedly have influence with these organisations.

"People have a right to know whether they have raised this ongoing campaign during these meetings.

"What are the DUP and UUP doing to end attacks on nationalists?

"What are they doing to end the ongoing feuding amongst the unionist paramilitaries?

"Sinn Féin is demanding that the leadership of the DUP and UUP tackle the issue of unionist paramilitary violence. Pretending that it is a reaction to the IRA or that it is 'tit for tat' is no longer tenable. It is time for the unionist parties to demonstrate to the entire community that they are serious about building a shared future.

"The current unionist paramilitary campaign must be tackled and addressed. A heavy burden of responsibility for this rests with Ian Paisley and the DUP as the largest unionist party."