The World Today - Miami 5 get retrial 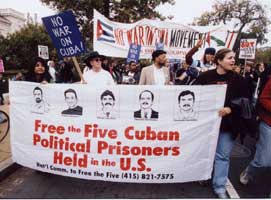 Following seven years of imprisonment, five Cubans who have become known as the Miami 5, are to have their cases heard again in a US court. The Miami 5 were given sentences ranging from 15 years to life in prison for charges arising out of their opposition to extreme right-wing, anti-Castro organisations based in the US state of Florida. The United Nations described the sentences as "arbitrary" and severe, while criticising the "partiality" of the tribunal.

Almost 19 months after their appeal on 10 March 2004, the Circuit Court of Appeals in Atlanta, Georgia declared in a 93-page ruling that arguments put forward by the men, their relatives and their defence team were valid. It said the five Cubans did not have a fair trial in Miami, Florida and recommended that they be retried outside that jurisdiction.

The men, Gerardo Hernández, Ramón Labañino, Antonio Guerrero, Gernando González and René González- were charged with "conspiracy to spy" in 2001. Three of the sentences now revoked were life sentences and the other two for 15 years or more. The five were accused of being agents working for the Cuban Government, and one of them was also accused of taking part in the shooting down of two small planes belonging to the organisation Brothers to the Rescue in 1996.

US Lawyer, Paul McKenna, who represents Gerardo Hernández, serving two life sentences plus 15 years for conspiracy to commit first degree murder, said that he will apply for bail as soon as possible as his client's legal status is now what it was before he was convicted. "The sentences have been quashed and the men do not have a criminal record; we are back to the starting point." The men's defence team described the court decision as "a victory for the rule of law" in the US and pointed out that there are renewed hopes that the case will conclude with their release. Lawyer Leonard Weinglass hailed the court's ruling as "really an historic opinion".

"Never before in the history of the United States has a Federal Circuit Court of Appeals reversed a trial court´s finding with respect to venue. This is a first. And in writing their opinion, which covers just one issue of the eight or nine issues raised on appeal, the issue being venue, the court analysed in great detail virtually every facet of the case, of the community, of the publicity, of the attitude of the jurors, the actions of the prosecutor and the motions that were made during and after trial."

Miami is the one city in the US where many people believe the 5 could not receive a fair trial. There are approximately 650,000 Cubans who live there in exile. They control the local press and media, occupy public offices and are the major business figures in the area. These individuals and institutions are highly influential and they all have one thing in common -- they take a hard line on Cuba. Miami is a different place than every other city in the US. A portion of the exile community has engaged in violent actions against Cuba for decades. Violence against Cuba is heralded in small, but vocal, circles in Miami. For instance, in Miami, Orlando Bosch walks the streets a free man. The US Justice Department once labelled Bosch "the most dangerous terrorist in the Western hemisphere". He was responsible for bombing a Cuban passenger airline in mid-flight in 1976, killing all 73 passengers on board. Hard-line exiles and their supporters play a large role in shaping public opinion and debate in Miami. To try the five in Miami was a clear violation of their right to have a trial free of outside influences that were prejudiced against them. The venue of the trial should have been moved to another location.

The lawyers found that the quashing of the sentences means that the five men, who have been serving their time on different high-security prisons in the US, should come back to Miami and the process should start again, so they will work to get the Miami 5 released on bail.

The Attorney's office now has to decide whether to appeal the appeals court's decision on the same court or to take the case to the Supreme Court. The Miami 5's defence team feels that an appeal will not be successful, and that the Attorney will have to decide how to re-launch the case when it comes back to Miami. However, any new trial against the men will have to take place outside this city.

From the start, the five Cubans rejected the charges made against them and stated that their activities were to investigate and stop any terrorist anti-Cuban elements based in Miami from carrying out violent actions against Cuba.

In fact, the Cuban Government brought to the attention of the US administration some of the activities of these anti-Castro groups. However, the FBI decided to detain the five Cuban investigators while allowing promoters of illegal activities against Cuba such as Posadas Carriles, Orlando Bosch or José Basulto to remain free. During the trial Basulto claimed that one of the lawyers was a "communist Cuban agent".