Remembering the Past - 44 Parnell Square 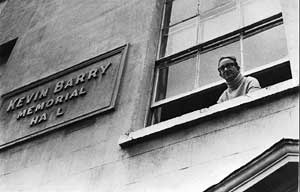 Dublin's Parnell Square is one of the country's most historic squares. It was here, in the Round Room of the Rotunda, site of the present Ambassador Theatre, that Volunteers met in armed convention in 1783.

At the beginning of the 20th Century both Sinn Féin in 1905 and the Irish Volunteers in 1913 were founded in the same room.

On one side of the square Tom Clarke, first signatory of the Proclamation, had his tobacco shop while on the other side Pádraig Mac Piarais, First President of the Irish Republic presented his sword to Britain's General Lowe, with the surrender of the Easter Rising.

The Square contains many notable houses. Number 29 was Vaughan's Hotel from where Michael Collins directed the '12 disciples' who eliminated 14 British intelligence officers during the Tan War. Number 31 was the headquarters of the Ancient Order of Hibernians, whose 'Hibernian Rifles' fought in 1916 armed with blunderbusses and dressed in bright green uniforms with large pheasant feathers protruding from their hats. Number 25 was the headquarters of Conradh na Gaeilge and the place where the Military Council of the Irish Republican Brotherhood planned the Rising.

Number 44 Parnell Square was the headquarters of the Irish Volunteers after their foundation. The room on the ground floor, currently occupied by the Sinn Féin Bookshop and other rooms, was where they held their executive meetings and it was in this room in 1914 that Pádraig Mac Piarais, frustrated with the Redmondite line-up within the organisation, decided to resign from the Volunteers. After walking from 44 to his residence at the Hermitage in Rathfarnham, he wrote a letter to JJ McGarrity in America informing him of his intention to resign, but later decided not to do so.

Monteith and another officer of the Irish Volunteers then went and negotiated with two officers of the National Volunteers. For a very tense period of time there was a stand-off situation but eventually the National Volunteers were persuaded to take an alternative route. Having prevented bloodshed Captain Monteith attempted to retrieve his 'loaned' ammunition, but found that none of the Citizen Army men could remember receiving any! On Easter Monday morning 1916 the order was given that the house be raided. Every stick of furniture and file was brought down to the GPO where Mac Piarais had it burned.

In 1925 the house came into the hands of the Republican Movement when it was purchased. Margaret Casey (nee O'Brien) and Rose O'Brien recall that their family were installed as caretakers at that time. Their father had fought in the Customs House and his wife had been shot dead by the Black and Tans in Bolton Street in 1921.

Renamed the Kevin Barry Memorial Hall, 44 Parnell Square became the nucleus for revolutionaries from the 1920s to the present day. Many groups operated from its rooms including Saor Eire, formed by Peadar O'Donnell and Dave Fitzgerald, prisoners groups led by Maude Gonne and Mary MacSwiney, the National Graves Association led by veterans such as Seán Fitzpatrick and IRA fronts such as the Anti-Imperialist League and the Boycott Bass Campaign. The back yard was used by the IRA in the 1930s as a rifle range and Kit Conway, who died fighting fascism in Spain, taught Frank Ryan pistol practice in the basement.

Once, in 1934 the Special Branch in Number Five, Parnell Square, headquarters of O'Duffy's Army Comrades Association or Blueshirts, reported: "With the use of field glasses, we kept Number 44 under observation. The meeting that was held there was for the purpose of giving instruction in the use and construction of a landmine which was to be exploded on the following day. That might be assumed to be in the County Dublin, but the only explosion which took place in this country on the following day was in Dundalk."

In 1931 Sinn Féin made its headquarters in 16 Parnell Square, sharing the building with a number of businesses including Robinsons Tea Rooms and a number of tenants. In 1935 a fire broke out and Mrs Higgins and her daughter Anne, both members of the party, died. Due to the fire the annual Ard Fheis was held in 44 with only 40 delegates representing the party.

In the late 1930s Seán Russell was a constant visitor to '44', the shorthand title becoming well known to republicans all over Ireland. Harry White, who worked with the National Graves Association from 44 in the late '40s, was known to throw bottles from the windows at unsuspecting Branchmen below. During the '50s and '60s, 44 was a hive of activity for those involved in the '50s campaign and for the housing committees and prisoners support groups which sprung up.

Following the split Sinn Féin Ard Fheis of 1970, what was known as the Caretaker Executive of Sinn Féin convened in Kevin Barry Hall, 44 Parnell Square. On the 17 August 1972, An Phoblacht moved from Kevin Street to 44 Parnell Square. The building is currently home to Sinn Féin's National Head Office.

Over the last 80 years the walls of 44 Parnell Square have echoed to the voices of poets, teachers, writers, soldiers, trade unionists, activists and various oddballs singing the song of Irish independence.