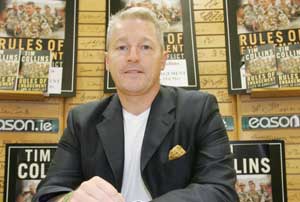 Tim Collins - the discredited ex-colonel of the RIR

The long-smouldering row about the guns used by the Parachute Regiment to kill 14 people in Derry on Bloody Sunday has re-ignited once again with new claims in the Sunday Times about the fate of the weapons.

The latest revelations centre on the activities of employees at a British Army storage facility at Donnington, Shropshire; the disappearance of all but five of 29 Bloody Sunday guns originally held in Building 54 of the facility; and the claims by the Ministry of Defence (MoD) that the other 24 were destroyed.

The disappearance of the guns and the destruction of two of the five remaining rifles held at Donnington has been known about for some time, but the latest article also recounts the police inquiry, codenamed "Operation Apollo" which followed.

The investigation uncovered an audit trail revealing that some of the weapons, including some which the MoD told the Saville Inquiry had been destroyed, were actually sold off, travelling through Beirut, Belgium, Canada with at least one ending up in the possession of the rebel group, the West Side Boys, in Sierra Leone. Of a list of 60 possible rifles which Apollo detectives wanted to trace, 14 have now been recovered.

The article points the finger of responsibility at employees at Donnington. It relates how officers from the West Mercia Constabulary encountered "a degree of contempt and resistance" during their investigations and how they found one message which said that "on Tuesday, the Battle of Hastings inquiry will want to find the longbow which put Harold's eye out".

However, while the Apollo report commented that it was "almost beyond belief" that the five remaining guns at Donnington were not protected once they had been identified and Saville had requested they be handed over, and that "No member of staff has been able to provide a convincing explanation" for the subsequent destruction of two of them, officers decided that there had been no conspiracy to conceal evidence from Saville. "What occurred was a combination of mistakes, human errors and negligence," it says.

John Kelly, whose brother Michael was killed on Bloody Sunday, disagrees with this conclusion. Speaking to An Phoblacht he said that it is now "beyond any doubt whatsoever that there was a conspiracy by the MoD to cover up".

"I certainly do not accept that it is just the responsibility of one or two obstructive individuals at Donnington as the article seems to suggest. They were told to do a job -- to hide or destroy the evidence -- and they did it. Don't forget, the article mentions that one of them received a £100 bonus for the work he did in disposing of evidence.

"I believe this goes all the way up the chain of command at the MoD. I would be very surprised if Geoff Hoon [the then British Government Secretary of Defence] knew nothing about this, or did not have a hand in it somewhere".

Kelly also argues that it is no coincidence that the two rifles destroyed after having been requested by the Inquiry were those used by Soldiers F and G. "Soldier F murdered my brother Michael," he said, "and Soldier G killed Gerard Donaghy. Those rifles contained vital evidence in both of those cases and they were deliberately destroyed by the MoD. Now that evidence has been lost."

He is also deeply concerned about the possible loss of one or more weapons which may have been modified in accordance with recommendations made by the British Army commander Major General Robert Ford shortly before Bloody Sunday. In a secret memo, Ford had suggested that the army modify some of its SLRs to fire .22 rounds, rather than the standard 7.62 ammunition, as the latter often caused additional injury or death to others than the intended target. With .22 rounds, Ford said, "known troublemakers" and rioters could be killed without incurring collateral damage. It is known that 30 of these modified rifles were sent to the Six Counties.

Throughout the inquiry, the MoD and British Army denied that this recommendation had been put into practice, but there is strong forensic evidence that Kevin McElhinny was killed with such a round. There is, fortuitously for the MoD, no trace of the gun.

John Kelly said that it was clear that the MoD never had any intention of co-operating with the Inquiry. "They have stuck two fingers up at Saville, who I believe has tried to do a decent job in recovering the rifles."

The issue of a Bloody Sunday gun recovered by the Parachute Regiment in a gun battle with the West Side Boys in 2000 has also arisen before. Earlier this year former Irish Guards Colonel, Tim Collins, who was involved in the British Army operation in Sierra Leone, wrote in his book of the captured gun: "It was only when they were back to the UK that it was discovered from the serial numbers that one of the rifles was actually an old 1 Para rifle. It was used on Bloody Sunday in Londonderry in 1972 when 13 protestors had been shot — and it had been declared destroyed when the Saville Inquiry into the shootings had asked for it."

Kelly says the Bloody Sunday families want to see Collins brought before the Saville Inquiry. "There are a lot of questions to be asked of Collins," he says. "For example, we want to know why, if he had this information, did he not come forward with it and make a statement. If he knew all along that the Paras had one of the guns, he should have volunteered that information to the Inquiry. Also, where is that rifle now? Why hasn't it been handed over to the Inquiry? These questions have to be answered".

"Remember that a Derry man was jailed for not appearing before the Inquiry, even though he had no information. Collins must be made to give evidence."

And, says Kelly: "It begs the question about all of the guns used on Bloody Sunday. Was the MoD telling the truth about any of them? How many of them were actually sold off abroad to be used in other killings? Are some of them still hidden away?"