Achieving the sovereignty of the people 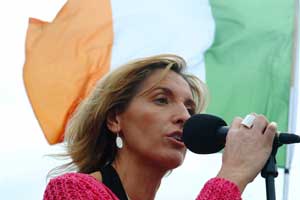 Most people who think of O'Donovan Rossa, think first of Pearse's historic words over the graveside in 1915: "...While Ireland holds these graves, Ireland unfree shall never be at peace..." Maybe some of us think of the unimaginable hardship O'Donovan Rossa endured in the worst of English jails, with his hands chained behind his back, eating his dinner off the floor. Maybe we also think of Cork, where he came from and the role of Cork people in the republican struggle down the years — but we think as well of what inspired O'Donovan Rossa to survive the appalling conditions he suffered in jail.

Why have Pearse's words, "Ireland unfree shall never be at peace..." become prophetic? Above all it has been the sacrifice, the courage, determination, selflessness, and steadfast resilience, in the face of all adversity, untold hardship, repression, persecution, even murder, that these great men and women have shown — many of whose graves are around us here.

We have basked in the glory of being a part of their struggle — wedded to the pride in these men and women whom we would wish to emulate, not just in terms of their sacrifice but also in terms of their extraordinary exploits of resistance which have inspired revolutionary movements around the world.

But in basking in this reflected glory, proudly aspiring and even confident in the belief that we might do the same, did we confuse the means with the end? Have we confused their determination, their dedication, with what it was that inspired these republicans, not just the heroes of 1916, the soldiers who fought their way through the Tan War and the Civil War, but those in our generation who gave their lives. Did we confuse the suffering, the willingness to give our all, with the objectives for which people struggled down the ages?

Is their sacrifice enough to lead us in our struggle today? When you look at the state of the world today that any liberation struggle must face, is our just pride in being a part of the struggle which such men and women have led, enough to ensure that in this 21st Century, we will achieve our objective of a 32-County democratic socialist republic?

Whatever it was that enabled O' Donovan Rossa to face the cruelty of his enemy with such fortitude, or the torture in the H-Blocks, it was not just the glory of the blood sacrifice. We would be fooling ourselves if we believed it so.

It isn't the making of war which determines the revolutionary character of a struggle. In whatever circumstances — war is a terrible thing, forced upon a subject race or class, as Connolly said, by tyranny which knows no other methods but the suppression of opposition by military means. No one would look to make war if it could be avoided.

What differentiates a revolutionary movement is not the desire to engage in armed struggle. It is the very opposite. A revolutionary is fighting for the right of people to live their lives free of oppression. A revolutionary is characterised by a determination to drive forward, at all costs, the demand of the people for justice, equality, to establish the human rights of all the people. It is an act not just of self-sacrifice, but of utter determined, resilient, relentless, unselfishness. What is the inspiration which enables people to live such lives as O'Donovan Rossa?

The Democratic Programme of the First Dáil proclaimed that the Nation's sovereignty extends:

o Not only to all men and women of the Nation, but to all its material possessions,

o The Nation's soil and all its resources,

o That all right to private property must be subordinated to the public right and welfare.

Does the nation's sovereignty extend to all the men and women of the Nation? What sovereignty have the people of the Six Counties when Britain still claims jurisdiction over our affairs? Do all the men and women of the 26 Counties have sovereignty over all its material possessions, and resources? If so, then why are five men from Rossport in jail today for struggling to claim the rights of all of the Irish people to our national resources? Resources which have been given away by backslapping, self-serving Irish Ministers to a consortium led by a British-based multinational.

Is the right to private property, or profit, subordinate to the public right and welfare, when the Dublin Government facilitates a multiplication of private hospitals — to provide health treatment for those who may afford it, whilst those reliant on public service wait — or go without.

Article 45 of the 1937 Constitution states that "the ownership and control of the material resources of the community may be so distributed amongst private individuals and the various classes as best to subserve the common good, and that, the operation of free competition shall not be allowed so to develop as to result in the concentration of the ownership or control of essential commodities in a few individuals to the common detriment." Yet today has not that principle of social policy been stood on its head by the so-called Soldiers of Destiny?

These are the two facets of our struggle, national sovereignty and social sovereignty — the sovereignty of the people — they are two sides of the same coin and they cannot be severed.

What does that mean? It means that the struggle for one is the same as the struggle for the other. Connolly said the national struggle is not about painting the letter boxes green, or all-Ireland government departments having the harp at the top of the page instead of the crown. If the material possessions, the nation's soil and all its resources and all the wealth and the wealth producing processes remain in the hands of those who have abrogated the sovereignty of the people for their own selfish interests — to preserve their privilege and power — then what sovereignty has been won?

The Good Friday Agreement didn't give us sovereignty. But, did anyone believe that the British were going to hand us a sovereign nation, to empower the people of this land to take what is theirs? Of course not.

That is our task — to bring the nationalism and socialism of our struggle together around the vision of the Proclamation. It is the selflessness and determination of such people as O'Donovan Rossa that has perhaps inspired us, and the words of the Proclamation which have told us the way, the sea in which we must swim, the sea of the people who would be sovereign.

This is the struggle of those who went before us, who we would seek to emulate. That is what I believe we should understand from Pearse's words — Ireland unfree will never be at peace.

The revolutionary cannot be at peace with injustice and inequality — without the sovereignty of the people. O'Donovan Rossa and so many who came before and after him, have set an example based on selfless determination and persistent dedication to achieve that end, no matter the cost.

Their example is not for us to bask in the pride of their amazing lives and sacrifices. But to get on with the job of achieving the sovereignty of the people, no matter the adversity, no matter the compromises and sell outs which would challenge or tempt people of less dedication, determination, or understanding.

This is our opportunity. Seize the time — make it ours — to achieve the sovereignty of the people — a 32-County democratic socialist republic.