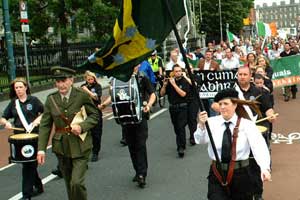 Dublin republicans march to the grave of O'Dovovan Rossa

The words were those of Pádarig Mac Piarais, but the voice was that of Dublin actor Jack Moylett, standing in Irish Volunteer uniform before a large crowd of people at the graveside of O'Donovan Rossa on Saturday afternoon 13 August.

Organised by the Dublin Republican Commemoration Committee as part of Sinn Féin's Ceád Bliain celebrations, the gathering marked the 90th anniversary of the funeral of the man who perhaps best represented the unbroken spirit of Fenianism.

Despite the undoubted attractions of Dublin and Tyrone at Croke Park several hundred people assembled at the Garden of Remembrance for the march to Glasnevin Cemetery.

At the graveside, Dublin Sinn Féin TD Aengus Ó Snodaigh chaired the proceedings, which commenced with the laying of a wreath and a minute's silence in memory of Rossa and all those who have died in the cause of Irish freedom. Mary Mullen was then introduced to sing O'Donovan Rossa's Farewell to Dublin.

This was followed by a selection of readings from Rossa's book, Irish Rebels in English Prisons by former POW Eamonn Nolan and Stephanie Rosseau of Ógra Shinn Féin. Aisling Ó Dalaigh read a passage from James Connolly's Why the Citizen Army Honours Rossa, first published in a booklet to commemorate the funeral. Renowned Irish traditional musician Tony McMahon provided music throughout this celebration of Rossa's life and struggle.

Perhaps the high-point of the day was the remarkable performance of Jack Moylett in the role of Pádraig Mac Piarais, declaiming without notes what is arguably most famous oration of the 1916 leader. There can have been few people in the audience who could have failed to be moved as Moylet concluded... "The defenders of this realm have worked well in secret and in the open. They think that they have pacified half of us and intimidated the other half.

Fittingly, the ceremony's main address honouring Rossa was given by another ex-prisoner and unrepentant Fenian. Sinn Féin Ard Chomhairle member Martina Anderson spent 14 years in English and Irish prisons, often in extremely oppressive conditions. Referring to the conclusion of the famous oration by Pádraig Mac Piarais she said: "The revolutionary cannot be at peace with injustice and inequality — without the sovereignty of the people. O'Donovan Rossa, and so many who came before and after him, have set an example based on selfless determination and persistent dedication to achieve that end, no matter the cost.

"Their example is not for us to bask in the pride of their amazing lives and sacrifices. But to get on with the job of achieving the sovereignty of the people, no matter the adversity, no matter the compromises and sell outs which would challenge or tempt people of less dedication, determination, or understanding.

"This is our opportunity. Seize the time — make it ours — to achieve the sovereignty of the people — a 32-County democratic socialist republic."

The commemoration concluded with a rendition of The Bold Fenian Men by Mary Mullen and a tune by Tony McMahon.