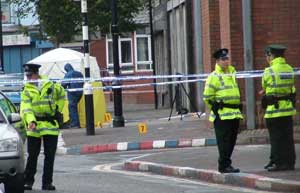 The Ulster Volunteer Force has vowed to "fight to the kill" in a bid to wipe out the LVF in the ongoing feud between the two unionist paramilitary gangs. The threat was issued after the UVF shot dead Michael Green as he arrived for work at a furniture store in the UVF-dominated Sandy Row area of South Belfast around 8.15am on Monday, 15 August.

The 42-year-old from Ballysillan Avenue in north Belfast, a well-known LVF stronghold, was fatally wounded when two gunmen open fire as he got off his motorbike. Green is the fourth man shot dead by the UVF since the power struggle over drugs and racketeering erupted last month.

Laurence "Duffer" Kincaid, who has a drug conviction and is presently on bail for possessing drugs, was shot in the chest by two UVF gunmen at a house in Glenside Park in North Belfast on Sunday 7 August.

A 28-year-old suspected LVF member Stephen Paul was shot dead outside his Wheatfield Crescent home in North Belfast home three weeks ago, just streets from where the UVF shot and killed 20-year-old Craig McCausland a fortnight earlier. The first man to die in the latest bout of unionist paramilitary feuding, 25-year-old Jameson Lockhart, was killed as he sat at the wheel of his lorry in East Belfast last month.

Despite the PSNI spending £30,000 a day on policing the feud, no one has been charged with any of the four killings. On the 25 July PSNI members stood idly by as hundreds of UVF personnel laid siege to homes in the Garnerville Estate in East Belfast in a bid to drive out families associated with the LVF.

Sinn Féin Assembly member for South Belfast Alex Maskey said the ongoing feud has masked from public view the sectarian campaign against nationalists which is being carried out by all unionist paramilitary gangs across the Six Counties.

"Given the fact that unionist politicians have for decades tolerated and in some instances encouraged the sectarian anti Catholic campaigns of the various unionist paramilitaries, it is not credible to suggest that they are powerless to act in the face of this latest feud".

Meanwhile, it has emerged the man shot in Lurgan on Friday 12 August in an attack believed to be related to the ongoing unionist feud was once questioned by the PSNI in connection with the murder of Sunday World journalist Martin O'Hagan in 2001.

Twenty-eight-year-old Gordon Hutchinson from Merrion Drive in the loyalist Mountainview Estate, a convicted drug dealer, was shot in the groin and stomach at playing fields in the Glenavon Lane area by a lone gunman who made his escape on a motorcycle. It is not thought his injuries are life threatening. Hutchinson, seen as being closely linked to the LVF, escaped with a suspended sentence last year after he was convicted for possessing details on republicans.