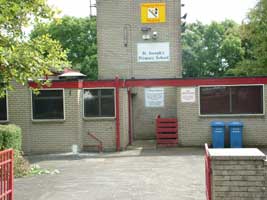 What is being increasingly referred to as a programme of "ethnic cleansing" perpetrated against the nationalist community of North Antrim has intensified with a nationalist couple vowing to leave their Ahoghill home after it was attacked with paint bombs on Monday night 15 August.

The town's Catholic Church as well as St Mary's and St Joseph's Primary Schools were also targeted by unionists in paint-bomb attacks. Both buildings were targeted in similar sectarian attacks in June.

Pat McCaughey and her husband, also called Pat, told how they had been watching television when she heard the paint bombs strike the front of her Tudor Vale home.

Pat McCaughey said she is "shattered" at the prospect of leaving her home after eight years. Three milk bottles filled with white paint were thrown at the house. One smashed through glass in the front door while a second landed in the living room. A third was flung at an upstairs bedroom window but did not break. Damage was caused to the hall and living room during the attack.

"We would never feel content in that house again as we feel this is only the start of things to come. We feel we have to move somewhere where we can feel safe, where we can live without being in fear."

North Antrim Sinn Féin Assembly member Philip McGuigan said: "The onslaught against the nationalist community in this area should cease at once. All right thinking people should demand that the nationalist community of Antrim be able to live their lives in peace and not have to look over their shoulders waiting for the next attack. It is a basic human right to be allowed live in peace."