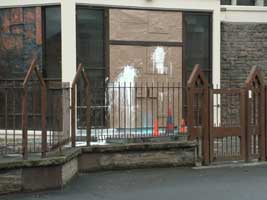 Sadly, while the murder of Thomas Devlin in Belfast may have been the most serious, it is not the only incident in recent days in which the PSNI have failed to take decisive action in relation to sectarian intimidation and attacks.

Last week the PSNI handed out smoke alarms and fire blankets to 14 nationalist families in the tiny North Antrim village of Ahoghill living under the threat of incineration in their own homes at the hands of unionist mobs.

A number of nationalist families have already fled following a sustained sectarian campaign of intimidation in the village. Residents were advised by the PSNI which upstairs window to jump from in the event of a fire bomb. One woman has already been forced to climb onto a roof to escape.

Oonagh Donaghy and her son Mark were forced to flee their burning home in Ahogill after they was targeted. Oonagh's aunt, Kathleen McCaughey, who had lived in the village all of her life, and her family were forced to flee from her home last month after repeated attacks and threats.

Kathleen, who lived with her daughter and two grandsons aged eleven and eight, left after Orange band members occupied her garden, banged drums and played sectarian tunes for hours. The PSNI were unable to make any arrests because the bandsmen temporarily left the garden each time they drove past. Local UDA paramilitaries had orchestrated paint and petrol-bomb attacks on a handful of nationalist homes, but the PSNI only offered a DIY solution to terrified residents.

DUP leader Ian Paisley, the local MP, was unable to comment on the plight of nationalist families living within his constituency. Party colleague and local DUP Councillor Martin Clarke claimed he was "too busy" to comment or condemn recent sectarian attacks on the Catholic church in Harryville.

There has been repeated attacks on Catholic churches in the greater Ballymena area since the end of June. Churches targeted include the Church of Our Lady in Harryville, All Saints, Crebilly and Ahoghill. Another Catholic church was targeted for sectarian attack in Lisburn. Sectarian slogans, "Taigs Out" and "UDA" were daubed on St Patrick's Church in the town centre.

Father Paul Symonds described the continuing attacks on the church in Harryville as "very frustrating". The latest incident followed restoration work on damage from a number of previous attacks.

Members of several Protestant churches in County Antrim took part in a clean-up operation in support of their Catholic counterparts. A joint prayer service was held on the steps of the Church of Our Lady before the work began.

Presbyterian Pastor Jeremy Gardiner said that people had "stood back for too long and let this happen". In an earlier gesture of solidarity members of High Kirk Presbyterian congregation had handed out red roses to Catholics attending Mass in Harryville.

Meanwhile, nationalist families living in a mixed housing estate on the outskirts of West Belfast have been told they will be burned out of their homes unless they leave the area. The threats are believed to come from the UDA.

Local Sinn Féin Councillor Paul Butler believes unionist paramilitaries from the nearby Seymour Hill area are trying to drive Catholics out of the area before a new housing development is completed. "When the first stage of development was completed at Redwood last year the UDA sprayed graffiti around the estate warning nationalists not to buy houses in the estate. I have no doubt the UDA is behind these threats."