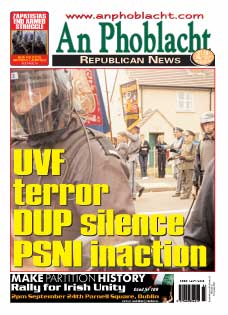 Silence and inaction from unionist establishment

Senior PSNI personnel have refused to confirm the sectarian nature of the murder of a Belfast teenager last week, despite a growing belief in the city that the sickening attack was the work of UVF members.

Investigating Officer Detective Superintendent Colin Sturgeon described the fatal stabbing as "totally random in nature" and said he had no reason to suspect a sectarian motive. Murder squad detectives were quoted as stressing there was "no evidence of a sectarian motive behind the attack", while British Secretary of State Peter Hain described the killing as a "brutal, appalling and apparently indiscriminate and motiveless attack".

Fifteen-year-old Thomas Devlin died after he was stabbed a number of times by at least three assailants as he walked home from a nearby garage on Wednesday 10 August. It was around 11.30pm. Fifteen minutes earlier the victim and two teenage friends had left Thomas home to walk the short distance to a shop at the local petrol station.

Thomas Devlin's parents, Penny Holloway and Jim Devlin described how the three friends had been playing computer games before leaving the house to buy sweets and soft drinks. The attack took place in Somerton Road, North Belfast just a few hundred yards from where the Devlin family lived.

Thomas was stabbed in the back five times. His 18-year-old friend was also stabbed in the back but a small pack bag is believed to have saved the second teenager from serious injury. A mobile phone call alerted Thomas's parents and they arrived at the scene within minutes.

An off-duty doctor and ambulance crew did their best to revive Thomas at the scene but he died a short time later in hospital.

The knife attack has been described as frenzied. The assailants are believed to have first encountered the three boys in the Fortwilliam service station before following them along Somerton Road towards Lansdowne Road. Surveillance cameras operating on the premises might provide identification evidence.

The men involved in the attack were apparently walking a dog. Minutes after the killing another young man walking in the area saw the three men, described as wearing hoodies‚ and the dog heading towards Lansdowne Road. "Look away or you'll get the same," one of the killers said to the man who was unaware of the stabbing.

There was no verbal altercation prior to the attack and the lack of verbal, sectarian abuse by the assailants appears to be the only factor behind the PSNI insistence that the killing was not sectarian. Curiously, despite labelling the killing as "random" and "motiveless"‚ the PSNI appeared in little doubt as to where to find possible suspects. Within 12 hours two men and a youth were arrested in the loyalist strongholds of Mount Vernon and Skegoneill.

The three suspects were held until Saturday night when all were released without charge. But one of the men questioned, a 22-year-old, was immediately re-arrested on a charge arising out of searches made in connection with the killing. He was charged with possession of ammunition. The charge has been described as "unrelated"‚ as if evidence of unionist paramilitary involvement bears no relevance to the murder of a young Catholic.

While the PSNI continue to insist that the killing of Thomas Devlin was not sectarian, loyalist sources from the nearby Mount Vernon Estate have said that unionist paramilitaries were involved and that the killing was sectarian. The sources have also told the media that the names of the killers are widely known.

A North Belfast man whose own son was murdered by the UVF has said there is no doubt that unionist paramilitaries were behind the murder. "The dogs in the street know who murdered that young boy," said Raymond McCord. "The police are saying it was not sectarian, but then why is it that one of those questioned and released about the murder was immediately arrested and charged with possession of ammunition?" he said.

The killing is being linked locally to the UVF. It has been claimed that one of the suspects was involved in a brutal punishment attack three weeks ago carried out on the orders of the Mount Vernon UVF.

The PSNI has also refused to comment on reports that a passing patrol may have stopped the murder gang prior to the killing.

"This attack bears all the hallmarks of a sectarian attack," said Sinn Féin's Gerry Kelly. The North Belfast MLA called on the PSNI to come clean and acknowledge the sectarian nature of the killing. Kelly pointed out that none of the teenagers targeted had been robbed. "The area has witnessed a number of sectarian attacks in recent months which have been similar to this."