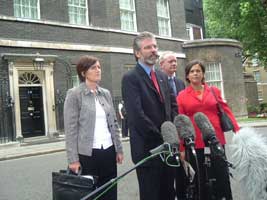 Arriving in Downing Street Gerry Adams said that he expected the talks would take place in a "good atmosphere" following the IRA's announcement. Adams used the occasion to issue a call to DUP leader Ian Paisley to enter talks. "I think he has a choice to make," he said. "Either he can join everyone else in building this process and let us get on or he can stand aside. I would prefer he would join us but that is his choice." He added that both the British and Dublin Governments needed to make clear to the DUP that they could not avoid a decision. "The governments cannot allow the DUP to delay and delay and delay again," he said.

Earlier Paisley, who held his own meeting with the British Prime Minister, was belligerent and negative: "We are not going to have any discussions about devolution until the requirements Mr Blair himself set out are fulfiled by the IRA."

Paisley's deputy, Peter Robinson, added: "We will take a prolonged period of time to make that assessment that they have gone and gone for good."

The unionists have been angered by the speed with which the British Government has moved to demilitarise parts of the Six Counties following the IRA's historic announcement of an end to its armed campaign. They have been particularly infuriated by the announcement that the three locally-recruited battalions of the Royal Irish Regiment are to be disbanded. "The British Government has caved in and given them concession after concession. We said we cannot tolerate that", Paisley said.