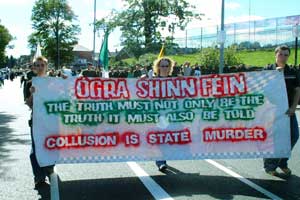 Ógra Shinn Féin Six-County Organiser, Barry McColgan hailed the event as a great success in "allowing young people to share their experiences and the effects on their lives, caused by the British state's active policy of institutionalised collusion with unionist death squads, resulting in the murder or attempted murders of their loved ones".

The clár for the weekend contained a wide variety of events such as historical tours of the Republican Plot at Milltown Cemetery and Ballymurphy, a discussion on international affairs, addressed by activists from the Basque youth organisation SEGI as well as a sponsored walk across the Black Mountain.

Ógra activists also attended a night of revolutionary music and song with the Basque band, Urgrabe as well as a new play, Ar an Phlúid‚ written by Brian Milligan and depicting the role of Kieran Nugent, the first blanket man.

Ógra Shinn Féin National Organiser, Mickey Bravender commenting on the Youth in Struggle weekend said: "The large numbers of young republicans attending this weekend's successful programme of events, which included educational, historical and campaigning elements, display huge dedication and commitment to the achievement of a 32 County socialist and democratic republic. Young republicans continue to play a leading role in the struggle for Irish unity and independence.