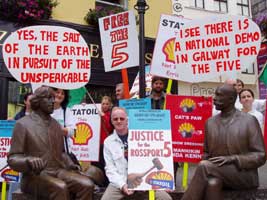 Galway protestors in support of the Rossport 5

In an abuse of the powers of government and the courts, the Rossport 5 remain in jail. The five Mayo men are now in their sixth week of imprisonment, on foot of an injunction which the High Court in Dublin accorded to Shell ordering them not to obstruct work by the multinational oil company on the pipeline across their lands. This work, it has been established, was and is illegal because Shell did not have the required consents from Minister for the Marine and Natural Resources Noel Dempsey.

Dempsey has ordered that Shell desist from this work and demolish three kilometres of pipeline already constructed, illegally, in the woods around the Bellinaboy site for its planned recovery station. Twice in the past week Shell has announced, with great fanfare, that they will de-construct pipeline. The announcements came in a letter which Shell allegedly sent to Noel Dempsey, the contents of which they have refused to publicise.

On Tuesday 4 August, for the second time Shell announced it was postponing work on the site, and laying off 127 people, pending the review ordered by the Minister, following revelations that a previous review was carried out by a company which had close connections to Shell. Mark Garavan, spokesperson for the Shell to Sea Campaign and for the men in prison, has pointed out that this is a strange way to proceed with dialogue when those whose objections you need to hear, you have had locked up.

Shell has consistently refused to lift the court injunction which would enable the release of the five Mayo men. The prisoners have said that they have not changed their views on Shell's plans, and they are not prepared to give an undertaking not to oppose those plans.

On Monday 9 August the Minister published details of the scope of the review of the onshore pipeline. The terms deal with the health and safety aspects of the pipeline. They state the Minister "reserves the right to require that such additional work be undertaken and information provided as part of the report as the Minister considers necessary, for the purpose of assuring the comprehensiveness, quality and appropriateness of the final report".

It is also included in the terms of reference that the authors may be required to make a public presentation of the findings. The Minister has given whichever of the eight companies that applied for the job, two weeks to complete a draft and a further week to complete a final report.

The terms are to identify the 'deficiencies' in the proposed installations. Mark Garavan points out that "this assumes that the pipeline is a 'given' and this misses the point".

"We have always said that we have no problem with the design, but it is the location and the consequences of something going wrong that are at issue."

Micheál O Seighin, one of the five jailed men, said in his original statement to the High Court, on the day his imprisonment was ordered, that the five men do not have a problem with the design of the pipeline. It is clear that technically it is the best it can be given current state of technology. Nobody designs a pipeline to burst. The problem is that it should not be there at all because the very concept of the pipeline transporting the uncleaned gas, under unprecedented pressures, so close to their lands and houses, represents an unacceptable hazard to local people.

"We do not question the design of this or any pipeline. We do not doubt the skill or bona fides of the designers or of the engineers who install or the technicians who fabricate the pipeline. Every pipeline is designed to function properly and not to fail, but perfection is a quality of the Divinity nor of pipelines," O Seighin said at the time. He went On: "We believe that no pipeline is designed to fail, to rupture or to leak, and therefore look askance at the implication inherent in the suggestion that this planned pipe is more safe than any other, which I take is to impugn the uberrima fides of the fabricators of other pipelines."

He pointed out that on 30 July last year, a Shell-operated pipe near Brussels burst, engulfing a wide area and killing 21 people. In the year 2000 a pipeline in Carlsbad, New Mexico blew up, incinerating a family of 12 picnicking in the desert. In the latter instance the people were killed 675 feet from the rupture of a 45 BAR pipeline.

He said there were dozens of other publicly-recorded pipeline failures, some fatal, some merely destructive. "We do not believe that negligence on such a necessarily wide scale exists in this truly global industry. Rather, we know that pipelines fracture or leak. No one is or should be jailed or executed for it, but it happens."

These objections have been made repeatedly. It has to be asked whether the Minister is serious about the review at all, or is just playing for time, during his summer holidays, given the widespread discontent across Ireland which the project and the continued imprisonment of five people has provoked.

Campaigners have pointed out that Shell has no intentions of changing their plan for the exploitation of the Corrib Gas. Not only are the terms of the contract uniquely favourable to the consortium, but campaigners say that this particular gas field is only a flagship project, which will allow Shell to exploit the other fields in the basin, using the offshore platform as the hub to which they can then pipe gas from other fields.

Campaigners have also claimed that in the longer term, Shell is unable on the current plan, to keep the pressures in the raw gas pipeline down to the lower levels they claim.

Meanwhile there have been protests again all around the country, at Shell and Statoil stations, and in towns where signatures to the petition to implement the demands of Shell to Sea have been gathered, and where support has been sought for the mass demonstration planned for 1 October in Dublin.

Last week, families of the Rossport 5 and supporters, occupied the Mayo County Council offices in Castlebar, and Enda Kenny's local constituency offices. This followed the refusal by the Chair of the Council, Henry Kenny, brother of Enda Kenny, to call an emergency council meeting.

Henry Kenny was responsible for the ridiculous contortions of the council at their previous meeting, where he announced that a resolution in support of the campaign, passed by the full council had been out of order on an entirely fabricated procedural ground.

This weekend Shell to Sea campaigners gather in Galway, where opinion against Shell's plans is growing in strength, and the implications for economic development of the Western seaboard with their refusal to process the gas at an off shore rig, are becoming clear.

"Shell's plans affect not only the people of Ireland, whose interests have been sold out, but they affect the livelihoods and future of the whole of the West in terms of the economic benefit which would accrue from an offshore processing rig, but which will be lost to Scotland if Shell gets its way," said Sinn Féin Councillor Gerry Murray. "Shell has to be stopped, and as the campaigners say — sent to sea."

The legal costs of the campaign in support of the five men in jail are huge.