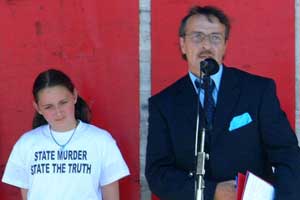 Thousands of republicans from across the country turned up in West Belfast on Sunday 7 August to support the demands of people whose loved ones were shot dead by the British crown forces for the truth about the killings to be made known.

The march, which assembled at the Whiterock Road, saw hundreds of people carry posters bearing the images of the many hundreds of nationalists shot dead by the British crown forces and their unionist surrogates.

Groups from Counties Tyrone and Fermanagh represented the families of people murdered in British shoot-to-kill operations.

One of the main attractions of the day was a lorry from South Armagh brought up by those involved in the campaign to have the area de-militarised. Complete with watch tower and heavily-armed British soldiers the tower was, 'demilitarised' by the good people of South Armagh in a skit performed at Dunville Park.

The rally in Dunville Park saw Albert Fullerton, son of assassinated Sinn Féin Councillor Eddie Fullerton address the issue of collusion between the British state forces and unionist death squads. Fullerton asked: "How is it possible over all these years for the British Government to kill Irish people and get away with it scot-free"?

Pointing the finger at the Dublin political establishment Fullerton said that the British got away with killing Irish nationalists because successive Dublin Governments acquiesced in those murders by failing to hold the British to account for their actions. "The British Government has got away with collusion for so long because of the compliance of Irish governments who never voiced concern at what was happening," he said.

The main speaker of the day was West Tyrone MP and Sinn Féin Vice President Pat Doherty. He welcomed the work carried out by people campaigning to expose the strategy of collusion employed by the British Government. "We've got to expose that policy and bring out the truth because the reality from a British perspective is that this is a strategy to murder members of their own state. In exposing this we will smash the British will to remain in Ireland".

At the rally in Dunville Park, activists and marchers alike were treated to street theatre with a replica British Army lorry being the centrepiece, courtesy of the South Armagh Farmers' and Residents' Demilitarisation Committee complete with spy post.

Also as part of the street theatre, the one time Iron Lady‚ Maggie Thatcher, made a very brief appearance.