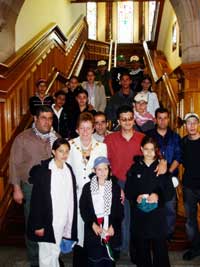 Children and staff from the Balata Refugee Camp in the Palestinian West Bank have been visiting Ireland at the invitation of support groups in Derry and Belfast. The Palestinian delegation was hosted by Derry Mayor Lynn Fleming at the city's Guildhall on Friday 5 August. Sinn Féin MLA Raymond McCartney presented a friendship plaque to Walid Abdelhadi who accompanied the Palestinian children to Derry.

US conference puts spotlight on collusion

IAUC President Judge Andrew Somers (Ret) announced details of the 22nd National Convention in Pittsburgh. "The theme of this conference will be British accountability and will focus on Britain's involvement in murder, police corruption, injustice, and the derailing of democracy in the North of Ireland." Somers noted that since the 1998 Good Friday Agreement the British Government has "suspended democratic institutions, stonewalled inquiries into loyalist collusion in murders and bombings, fictionalised accounts of IRA activity and committed violence in every Catholic community to promote hate parades disguised as 'cultural' events.

"With this conference we hope to send a wake up call to all Americans. If you think it's over... think again. Come and listen to eyewitness accounts and hear their appeals for Americans to make the Good Friday Agreement the first Anglo-Irish treaty that England actually lives up to and implements."

The Convention program includes an address by Canadian Judge Peter Cory who investigated the involvement of collusion in the murders of Robert Hamill and solicitors Pat Finucane and Rosemary Nelson. Former Sinn Féin MLA Mary Nelis from Derry will be the recipient of the 2005 Paul O'Dwyer Award.

Sinn Féin West Belfast Councillor Michael Browne on Tuesday evening 9 August repeated the party's call for anyone with information regarding the horrific rape of a girl on the Blacks Road the previous weekend to bring it forward. Browne has also dismissed as "completely false and inaccurate‚ a UTV report that Sinn Féin had told people not to bring forward information relating to the despicable and sickening attack".

"The Sinn Féin position on this horrific rape is very clear. We have been working closely with the local community in West Belfast to ensure that every available piece of information is brought forward to be used in a court of law to ensure that successful prosecutions are brought against those responsible. And I would repeat that call again tonight.

"Sinn Féin is not prepared to allow this case and the trauma it has caused to its young victim to be used as some sort of political football to further any agenda other than justice."

No Apprentice Boys march in Ardoyne

The decision to ban the planned Apprentice Boys parade on 13 August from passing through three nationalist areas has been welcomed was the only logical decision which could have been taken.