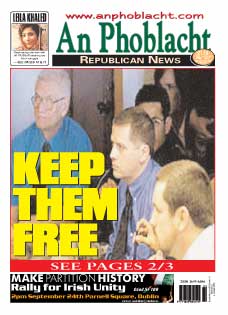 The Colombia Three - Keep them free

The Colombia 3 returned to Ireland last week to a mixed reception, polarised between the relief of their families and the hostility of unionist politicians in the North and opposition parties in the South. A divided media reflected both positions with the extreme right demanding the immediate extradition of Jim Monaghan, Martin McCauley and Niall Connolly back to Bogota while the other commentators reiterated the appaling human rights record of the Colombian regime and the 26-County Government's obligation to protect its own citizens.

The three men were initially detained at Bogota's El Dorada Airport before boarding a flight out of Colombia in August 2001. Accused of training Colombian rebels they endured three years imprisonment in some of Colombia's most notorious jails while awaiting trial. During their incarceration the three men remained in constant fear for their lives, surviving at least one serious attack.

In many ways the three Irishmen became the victims of changing international circumstances as the world came to terms with the 11 September attacks in the United States. Despite the fact that there was never any real case to answer the three men inadvertently became caught up in post-9/11 hysteria and the subsequent hunt for international terrorists.

At trial the prosecution's case collapsed after forensic evidence was exposed as totally unreliable and so-called witness evidence was completely discredited. All three were found not guilty and acquitted of all of the most serious charges against them in April 2004.

In any country where accepted international standards of justice apply the story of the Colombia 3 would have ended there and then with the immediate return of the men to Ireland. But Colombia is not such a country. Condemned by organisations as diverse as Amnesty International and the United Nations, the current Colombian regime is notorious for its appaling record of human rights abuses and atrocities carried out against its own population.

Initially the three men refused to leave Bogota jail without re-assurances regarding their safety. The Colombian Government rejected a request by the Attorney General that the men should be allowed to return to Ireland and in June 2004 the three left Bogota to travel to an undisclosed location. Despite the discredited prosecution case and the absence of any further evidence the three men were subsequently convicted in their absence on appeal in December 2004 and given sentences of up to 17 years in jail.

Since then nothing had been heard of the three men until reports of their return to Ireland began to filter through the Irish, British and international media last weekend. In an exclusive interview with RTÉ's Charlie Bird, Jim Monaghan dismissed media speculation that there had been some kind of deal brokered to secure the three men's return to Ireland.

"No, not that I am aware, there hasn't been any deal of any sort. We returned as soon as we were able", said Monaghan. "I am back in Ireland only a few days and, as you can imagine, a lot of people in a lot of countries had to help us, and I can't endanger those people by giving any details about who they were or even where they were."

Responding to a question Jim Monaghan said he did not consider himself or the other men to be 'on the run'. "No, I wouldn't be giving this interview if I was on the run. I'm back and I would hope that I would be left in peace," he said.

Commenting on the actions of the Dublin Government, Jim Monaghan said they had been "quite good during the time we were away. The Taoiseach asked that we would be sent back while we were waiting on the appeal, so I hope that [the government] would continue in this vein."

Speaking to the media Niall Connolly's brother Dan said his mother and the whole family were "absolutely delighted" by the men's return. "We would like to thank Caitríona Ruane and Peter Madden, as well as the lawyers in Colombia, the observers and politicians and all the supporters who took an interest in the case," said Connolly.

Bring Them Home campaigner and Sinn Féin Assembly member Caitríona Ruane said that supporters of the Colombia 3 did not expect the Dublin Government to return the men to Colombia despite political pressure to do so. "The Irish government is very aware of the dangers the men would have to face if they were returned to Colombia."

"Between them they have eight children, some of whom they haven't seen for four years. They have suffered terribly. The trial lasted seven-and-a-half months. It was open and transparent. The world media was present and international observers. When presiding Judge Acosta found them innocent, he also ruled that the only two prosecution witnesses should be investigated for perjury."

As the Sunday Tribune pointed out the "case against extradition is compelling". Commenting, the editorial said there were good reasons why Ireland doesn't have an extradition treaty with Colombia and went on to describe Colombia as a "human rights disaster" and its judges, jails and justice system as "unreliable, to say the least".

"For an Irish Government to consider sending Irish citizens to such a patently unjust place, where individuals perceived to be in opposition to the regime are regularly killed and tortured, would be a step too far for many Irish people" said the Tribune.

Predictably, unionist reaction has been far from sympathetic. Senior Ulster Unionist Michael McGimpsey accused the Irish Government of doing a deal with republicans. "The Irish Government is unlikely to send them back, as this move is likely to be part of the latest concession choreography to republicans. Once again despicable political expediency is replacing common sense and due process", said McGimpsey.

DUP Deputy Leader Peter Robinson described the idea of the three men being allowed to "live freely in the Republic" as a "terrible affront". "We are looking for their immediate arrest and for the Republic to hand them over to the Colombian authorities. Calling for the men's "swift extradition", Robinson said any other course of action by the Irish Government would render Bertie Ahern a "terrorist collaborator".

However, legal observers have pointed out the difficulties of such an extradition request. For a start the Dublin Government doesn't have an extradition treaty with Colombia. Extradition could only take place on the back of such a treaty between Ireland and Colombia and such treaties are not retrospective.

The propriety of such a treaty with a regime that continues to attract serious criticism from the United Nations for persistent and systematic human rights abuses would in itself be questionable.

Although extradition treaties are a matter for the executive, the Irish government could not enter into such an agreement without the approval of the Dáil. Furthermore there exists a general prohibition against extradition for political offences such as those for which the men stand accused.

Add to this a procedure that allows those threatened with extradition to prevent the order being acted upon if, for example, it could be shown that their lives would be endangered. And as the Irish Times pointed out "a brief perusal of material available through Amnesty International and the United Nations High Commissioner for Human Rights would suggest that such concerns have a firm basis in reality."

Suggestions by the Colombian Government that there is an Interpol warrant regarding the men is believed to be misleading. Interpol carries only a list of people wanted by various governments throughout the world.

Niall Connolly's brother Dan said that his family did not believe there are grounds for extradition. "And if one were brought we believe it would be defeated in the courts. We don't believe either that Irish people would want their citizens being sent back to Colombia, particularly where there is an understanding of the human rights situation in that country".

But there are those for whom human rights and the rights of Irish citizens to be protected by their government stand as a poor second to the opportunity to damage the Peace Process. Sadly this is not confined to reactionary elements within the North. Fine Gael leader Enda Kenny demanded an immediate statement from the Taoiseach to clarify "whether this issue was part of the negotiations between the government and Sinn Féin. Meanwhile Conor Cruise O'Brien called on the Irish Government to "move immediately to have them extradited". It was the "gravest test" of Ahern's political career," said the Cruiser. Of course such exaggerated nonsense merely reflects the deep-seated antipathy towards republicans and the entire Peace Process by an unrepresentative reactionary element and cynical political opportunists in the 26 Counties.