Remembering the Past: Jeremiah O'Donovan Rossa 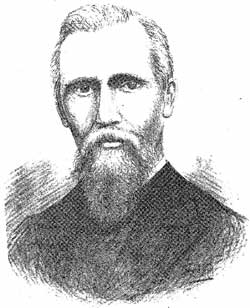 As the 90th anniversary of the death and funeral of O'Donovan Rossa approaches, An Phoblacht's Shane Mac Thomáis looks back at the life of this remarkable Fenian.

The career of Jeremiah O'Donovan Rossa was the epitome of the history of Fenianism. He was, as John Devoy said, "the very incarnation of its spirit". Born to Irish tenant farmers on 11 September 1831 in Rosscarbery, County Cork the young O'Donovan Rossa was to witness the Famine and the brutal effects of imperialism first hand.

In 1856, he founded the Phoenix National and Literary Society 'for the liberation of Ireland by force of arms'. Rossa gives the following account of its creation in his recollections: "I remember the night we met to give it a name. Some proposed that it be called the Emmet Monument Association, others proposed other names. I proposed that it be called the Phoenix National and Literary Society — the word Phoenix signifying that the Irish cause was again to rise from the ashes of our martyred nationality. My resolution was carried, and that is how the word Phoenix comes into Irish national history."

Stephens himself came to Rosscarbery in 1858 and O'Donovan Rossa was one of his first recruits. In December, 1858 Rossa was arrested and jailed without trial until July, 1859. He was accused of plotting a Fenian rising in 1865, tried for high treason and sentenced to penal servitude for life due to his previous convictions.

He was imprisoned in Pentonville, Portland and Chatham Prisons in England where, for eight years, he suffered inhumane and cruel treatment at the hands of the prison authorities. He was fed on bread and water for 28 days at a time. In Chatham, his hands were cuffed every morning at 6:45am and in order to eat his food, he had to get down on all fours like a dog. This went on for more than 30 days (see illustration below).

In 1869 he was elected to Parliament for Tipperary but his election was declared void because he was imprisoned. Rossa served part of his sentence but was released in the general amnesty of Fenians in 1870 with the understanding that he did not return to Ireland. Given a choice, he weighed going to Australia, but settled on America. O'Donovan Rossa arrived in New York City in January 1871 aboard the steamer SS Cuba with other released Fenian prisoners Charles Underwood O'Connell, John Devoy, Henry Mulleda and John McClure.

Of the five, only Rossa and Devoy remained active, both joining the fledgling Clan na Gael, founded by New York Herald scientific reporter Jerome J Collins in June 1867 as a response to the feuding within the Fenian Brotherhood. Upon his arrival, Rossa joined the Fenian Brotherhood and edited the American edition of the United Irishman, and ran unsuccessfully for political office against Tammany Hall's William Marcy 'Boss' Tweed in 1871. In 1872 he leased The Northern Hotel near Chatham Square in Manhattan's notorious Five Points district.

On 4 September 1875 an anonymous letter appeared in Patrick Ford's Irish World, the premier Irish American newspaper of the day. The letter called for militant action, which "does more to keep the faith alive than a thousand sensible, prudent, wise-headed patriots who crawl on crutches... into forgotten graves". The idea was not lost on Rossa. He responded with a letter on 5 December and established what he called a 'skirmishing fund'‚ to begin soliciting donations for an armed campaign in Ireland. He proposed the use of the newly-invented dynamite as the instrument of retribution. Although the like-minded Ford had editorialised that there were enough Irishmen living in England to "give London to flames and reduce Liverpool to disaster...spread through all the emporia of England, terror, conflagration, and irretrievable destruction", he held the letter for three months before publishing it in March 1876. The fund was wildly successful, collecting $23,000 by March 1877 from 30,000 contributors in the United States, Canada, Ireland, England and Scotland.

Rossa began writing a column in the Irish World and in it, chastised his old friend Devoy and Clan na Gael for embracing a policy of co-operation with the constitutional movement. Rossa's threats of bombings worried Clan na Gael. Secretly, they planned the very same thing and Rossa's bombast was calling undue attention to them. When the fund reached $43,000 late in 1877, Clan na Gael seized control, but left Rossa as secretary.

Rossa's call to arms was nothing more than that until January 1881 when a bomb exploded outside a military base in Salford, near Manchester. In June 1881 two of Rossa's men were arrested in Liverpool with a cast-iron pipe filled with explosives smuggled from America. Two weeks later, six dynamite bombs, dubbed 'infernal machines' by the press, were discovered aboard the SS Malta, docked in Liverpool after arriving from America. The bombing campaign was underway and Rossa had struck a blow for Irish freedom.

Rossa, by now a celebrity of international proportions, was questioned by reporters about the bombings. He admitted to supplying the money. The British Government began calling for his extradition. When the reins of Clan na Gael power passed from John Devoy in New York to Alexander Sullivan of Chicago, the Skirmishing Fund came under the control of The Triangle. This was an inner circle consisting of three members of Clan na Gael who re-instituted Rossa's original scheme and began in earnest the 'Dynamite War' against England.

The Rossa aspect and the Clan na Gael portion of the entire affair is lumped together, but the devices used by Rossa's men were crude and caused little damage. The explosives used by the clan bombers were far more deadly and created far more havoc, but it was Rossa's mastery of propaganda, more so than his actions that put fear in English hearts. Due to his campaign, he was shunned by nearly every branch of the nationalist movement, and it also nearly cost him his life.

An Englishwoman named Yseult Dudley met Rossa near Broadway on the pretext of making a contribution to his skirmishing fund and shot him several times. The incident caused a sensation in New York as Rossa and even some of his detractors declared Dudley to be an agent of the British Government. The British claimed she was a mentally unstable woman acting on her own delusions.

Rossa settled on Staten Island and would tell of his experiences in his 1874 book Prison Life (re-released as Irish Rebels in English Prisons in 1882) and Rossa's Recollections 1838-1898.

For the remainder of his life he remained the most visible Irish exile in America and an outspoken critic of British occupation of Ireland. He appeared at speaking engagements all over the country relating his prison experiences, performing readings of his books and giving accounts of his involvement in the Fenian Brotherhood and his fight against England.

No longer a political pariah, he visited Ireland in 1894 and was given a patriot's welcome. He visited again in 1904 when he was made a freeman of Cork City.

In Dublin, a memorial to Rossa stands in St Stephen's Green and Richmond Bridge over the Liffey was renamed O'Donovan Rossa Bridge in his honour. Skibbereen is home to the O'Donovan Rossa Memorial Park.

On his deathbed, aged 83 , he sent 'Rocky Mountain' O'Brien to get old friends John Devoy and Richard O'Sullivan Burke and bring them to his bedside. He died a tired old warrior on 29 June 1915 in St Vincent's Hospital on Staten Island after a two-year illness. Devoy, contacted Tom Clarke in Ireland, himself a Clan na Gael member, and Rossa's remains were sent home.

Next week, the funeral of O'Donovan Rossa.