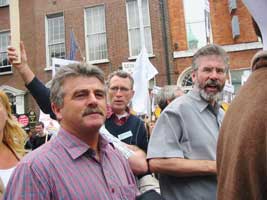 Minister for Marine and Natural Resources Noel Dempsey, on Monday of this week ordered Shell to dismantle the pipeline it has illegally constructed in County Mayo. But the order issued to Shell to desist was misleading, because as Dempsey knows well, protestors at the Bellinaboy site have blocked any work on the site. As the relevant consents have not been given to the consortium they intend to continue their blockade of the site.

Then on Tuesday 2 August, Dempsey following his much publicised order to Shell, gave his consent to the multinational to start laying the 92kms offshore, under sea, pipeline through which it plans to bring raw gas to the shore through Broadhaven Bay.

Solitaire is a state-of-the art boat, nearly 1,000 feet long, which welds the pipe on board, and is reportedly able to lay between four and eight kilometres of pipeline a day. It is estimated that that the boat will have the 92kms laid within a couple of weeks. Micheál O Seighin commented after the announcement by Dempsey: "It makes a complete nonsense of the supposedly independent reviews he has ordered only last week, on the safety aspects of the onshore pipeline. He might just as well not have bothered with these reviews, if at the end of the day, the pipeline, irrespective of the review results, will go through to the shore."

In breach of EU law

Dempsey was able to give his consent to this offshore part of the Shell project because the government has 'split' the project into different sections. The practice, known as 'project splitting' is illegal under EU law, because it means that the whole of the project, judged in its entirety, can then avoid assessment and planning regulations as a single project. Consent cannot under EU law be given piecemeal.

Nevertheless Shell, acting on behalf of the consortium, characteristically intends to go ahead with this separate part of the project.

Eddie Diver, Chairperson of Erris Inshore Fishermen's Association was warned by Shell last week that they would not tolerate any interference with work on the offshore pipeline. Eddie replied that the EIFA would not co-operate with Shell while five men are still in Jail.

Last year, Eddie Diver wrote to the then Minster of Marine Dermot Ahern. He raised the issue of location of the terminal effluent discharge pipe. This is also to go through Broadhaven Bay, with its outfall to be located 18kms off shore, a mere 500kms from the boundary of the EU designated Special Area of Conservation (SAC) in Broadhaven Bay. Eddie is still waiting for a reply.

Meanwhile only last Friday, the Commission for Energy Regulation (CER) announced that it was planning to approve a huge 25% increase in the price An Bord Gáis can charge residential and small business customers for gas. This increase comes on top of a 20% increase since April 2003.

The average domestic heating bill is €756 a year. The proposed price increase would raise this cost by €190 to €946 per annum. Small businesses which rely of gas for energy, were up in arms.

According to Pat Delaney of the Small Firms Association, this price rise would have a substantial impact on competitiveness of small firms, especially in export markets which the small firms in the Irish economy seeks to penetrate.

And this is only a part of the story. Such an increase in the price of gas would bring a considerable inflationary pressure on the Irish economy, as well as the key effect of lowering everyone's real wage. All Irish people who are dependent on gas for home heating and energy requirements become that much poorer.

"It is typical behaviour by the Government to negotiate with the social partners an increase in money wages, but then to negate the effect of this on real wages, by facilitating an increase in prices of essential goods and services upon which all wage earners depend."

The proposed increase in gas prices allowed by CER to Bord Gais is doubly reprehensible, when seen in the context of the Shell's Corrib venture. It pinpoints the huge gains forgone by the sell-out of our national gas resources to the oil companies.

Gas is normally sold several years in advance of on-stream supply. Had the government retained a stake, like other countries across the world, in the exploitation of Irish hydrocarbon resources, then Bord Gais could have been selling gas forward, for years to come, at a given low price, from which all Irish domestic industry, and all consumers would have stood to gain through the resulting competitive advantage.

Minster Dempsey, in justification of his decision to give Shell consent to build the offshore pipeline, said that "it was strategically important for Ireland in terms of enhancing security of gas supply". Nothing could be further from the truth.

The security of Irish gas supplies is copperfastened, not because of Shell's exploration plans at Corrib, but precisely because of the two interconnectors which give the Irish grid access to European gas supplies, and in the longer run to supplies from Siberia and the Caucasus.

This point, ironically, is all the stronger in the light of the recent decision to build a gas interconnector between England and Norway, which allows the Irish market to access Statoil's gas produced in Norway.

As Micheál O Seighin said on a recent visit by family members: "The issue which has stirred the Irish people in our defence has been not just the injustice of our imprisonment, but the fear of loosing what is theirs."

What is theirs, on recent estimates made by Mike Cunningham, ex-Statoil CEO are huge. The Corrib field, he says, is about One Trillion Cubic Feet (TCF), but the potential over three years in the Erris Slynne basin, which is the area opposite Mayo, is between four and seven TCF, with expectations of between four and five TCF in the subsequent period.

Over the whole period this comes to between nine and 13 TCF. At the present value of gas, estimated, on the basis of oil equivalent, of an oil price of $60 a barrel, values each TCF at $5 Billion (dollars). This values the reserves in the Erris Slyne basin at between $45 Billion and $65 Billion.

If the price of oil were to rise to $100 a barrel over the next five years, as most experts predict, this gives a value on the gas reserves in the Erris Slyne basin at between $63 Billion and $91 Billion.

These figures take no account of the Dooish field off Killybegs. Nor do they take any account of the spin-off industry which would come to Ireland and the West Coast, if the gas were processed at sea. The Shell plan means no spin-off to the Irish economy in terms of servicing the rigs at sea.

Processing the gas at Bellinaboy, means, according to Dempsey, 50 full-time jobs. This is not the truth because Shell themselves are on public record as saying that it would bring 27 highly-skilled jobs to the area, few of which, Pádraig Campbell, Chairperson of the SIPTU Offshore Oil Workers' Committee, points out, will be filled by Irish or local people.

The value of the gas represents a huge sum by any accounts. Shell will take all of this because. This is due to the fact that the terms of the agreement between Shell and the Dublin Government means that the exploration costs of realising the value of the gas can be written off against any tax owed, which is charged only at the ridiculously low rate of 25%. And these costs are not field or time specific. It is carte blanche to the consortium to do what they like with the reserves that belong to the Irish people.