Positive and enthusiastic US response 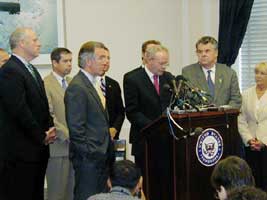 Martin McGuinness MP in the USA

On Wednesday 27 July a Sinn Féin delegation, including the party's Chief Negotiator Martin McGuinness and US representative Rita O'Hare, travelled to the United States. An Phoblacht's John McClure accompanied them on a remarkable 48-hour visit.

Travelling to the US late last Wednesday, Martin McGuinness's visit was a clear recognition of the important role the Washington administration and Irish American opinion has played in the Irish Peace Process and of the importance the Sinn Féin leadership places on its continued contribution in the time ahead.

McGuinness's breakneck visit to the US, accompanied by Sinn Féin's representative in the US, Rita O'Hare, was a remarkable two days.

The response in the United States to the IRA statement — from the Bush administration, through Irish America and across the media - was universally positive and enthusiastic. The Sinn Féin team had hardly landed when former President Bill Clinton rang to offer his continuing support and help.

The mood in the United States was summed up by former Governor of New York, Hugh Carey. Speaking at a lunch to mark the historic IRA initiative on Friday he said: "This is not the time for people in the USA to sit back or drop out. This is the time to increase our efforts to end suffering and injustice in Ireland and to finish the job of making peace a reality.". The need for the DUP to respond positively to the new situation was a common theme at every engagement.

Martin McGuinness's visit began in Washington at a breakfast meeting with the US Administration's special envoy Mitchell Reiss, who, like his predecessor Richard Haass, has made a valuable contribution in attempting to break the deadlock in the Peace Process. This was followed by a visit to the State Department before the formal press event on Capitol Hill hosted by long-standing friends of Ireland, Congressmen Richie Neal, Jim Walsh, Peter King and Joe Crowley.

A huge media pack gathered in Congressional Committee Rooms as McGuinness, flanked by 16 members of Congress from both the Republican and Democratic parties, gave his response to the historic IRA statement. He warmly welcomed the statement and commended the IRA for the decisive initiative, saying it contained the potential to "unlock the political stalemate that has frozen the Irish Peace Process and the implementation of the Good Friday Agreement."

The Sinn Féin delegation stayed on Capitol Hill for the rest of the day, moving from the Congress to the Senate where they met Senator Pat Leahey and senior staffers for Senators Edward Kennedy and Chris Dodds. Before leaving for New York Martin McGuinness spoke to Senator Hilary Clinton who also welcomed the decisive initiative and offered her support to move the Peace Process forward.

Friday in New York was no less remarkable. Early morning interviews on national Television networks began at 5.30am, reflecting enormous media coverage across the United States. Long-time friend of Ireland and the Peace Process Bill Flynn hosted a press conference followed by a lunch for key opinion-makers which Martin McGuinness addressed. The spectrum of opinion attending was a tangible indication of the significance of Thursday's IRA announcement. It included Cardinal Egan of New York, Former US Secretary of State Henry Kissinger and former New York Governor Hugh Carey. Here again the response was positive and encouraging. Speaker after speaker urged the DUP to fully engage in the Peace Process and expressed the hope that the Irish Peace Process could become the model for conflict resolution throughout the world.

Martin McGuinness was enthusiastically applauded when he concluded by pointing out: "Ian Paisley's party, the DUP, must now decide if they want to be part of a better future for all our children. They need to move away from the politics of intolerance, bigotry and triumphalism. The DUP need to learn the politics of peace making."

As the Sinn Féin team prepared to leave the US after a gruelling and sleepless 48 hours, breaking news read from palm-top computers reported that President Bush had phoned Gerry Adams to welcome the IRA decision and that British fortifications had begun to be dismantled in Derry and South Armagh. Supporters of the Irish Peace Process across the political and economic spectrum were visibly enthusiastic and expressed a determination to build on the potential created by the momentous decision by the Irish Republican Army.