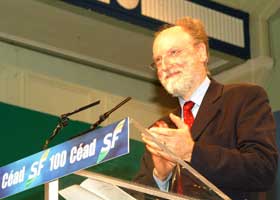 Last week's historic statement by Oglaigh n héireann was headline news across the world and elicited enthusiastic responses from political leaders and friends of Ireland internationally. The overwhelming majority of reactions were positive and warmly welcoming.

The African National Congress responded officially by welcoming the announcement saying that it marked an important step forward in the ongoing struggle to achieve a peaceful, just and lasting solution to the conflict in Ireland.

It went on: "The ANC commends the IRA for demonstrating resolve and leadership at an important historical moment. The ANC further urges all parties in Northern Ireland, together with the Irish and British Governments, to seize this opportunity to move forward with the Peace Process."

In a separate statement the South African President Thabo Mbeki said: "Today's announcement that the IRA has given up the use of armed resistance to achieve its aims can be rated as one of the most encouraging events in decades of protracted struggle in Northern Ireland."

He said that by ending the armed campaign and seeking political means to realise its aspirations "the IRA has clearly chosen the peace path. In this it has set an example to the rest of humankind, in much the same way that South Africans chose such a course, despite years of conflict and racism, in the early 1990s leading to the settlement of 1994 and the advent of democratic life in our country."

He said Gerry Adams had personally contacted and briefed him about events, outlining "what can only be viewed as a realistic path to peaceful resolution of the impasse, given the will on all sides to make peace work. We encourage all concerned in every way possible to hold fast to this historic decision, and to appreciate that there is every reason why any remaining forces that would favour violence, from any quarter, should be opposed."

Mbeki concluded saying: "The Government and people of South Africa will offer their warmest congratulations to all those concerned in this brave and far-sighted decision. As President, I would add my personal congratulations. One can now be more optimistic than ever that the process to peace in the lovely island of Ireland will be steady and successful."

At a press conference held in Donostia, Arnaldo Otegi, Batasuna (Basque Country) national spokesperson said:"The National Executive of Batasuna welcomes the statement made public today by the IRA. We take that decision in a very positive way. Once again, it is the decisions taken by the Irish republicans that make the Peace Process go forward.

Batasuna re-affirms full support to the Irish Republican Movement and to its courageous and positive nation-building political strategy. Batasuna wishes all the best to the Irish people and its legitimate right for national independence".

The Pope said the announcement had given "satisfaction and hope to that island and the whole international community".

"I encourage everyone, without exception, to follow the path set out with courage, and to take further measures to reinforce mutual trust, promote reconciliation and consolidate negotiations for a just and lasting peace."

Josep Borrell, President of the European Parliament welcomed the "important step forward in the long-lasting Peace Process in Northern Ireland".

Francis Wurtz President GUE-NGL, European Parliament said: "Now a new stage opens for the construction of a just and lasting peace by the full implementation of the Good Friday Agreement. Sinn Féin has been able to take its responsibilities. We hope that all the other parties to the agreement can take theirs. The Irish people must be able to freely decide their own future, including the unification of their country and respect for their independence."

The US administration responded to developments last week by stating that it welcomed the IRA statement which was "an important and potentially historic statement".

The statement went on: "Consistent with the IRA's commitment to 'the development of purely political and democratic programs through exclusively peaceful means' and to 'not engage in any other activities whatsoever,' we understand that the IRA and its members will no longer have any contact with any foreign paramilitary and terrorist organisations.

"This IRA statement must now be followed by actions demonstrating the Republican Movement's unequivocal commitment to the rule of law and to the renunciation of all paramilitary and criminal activities. We understand that many, especially victims and their families, will be sceptical. They will want to be certain that this terrorism and criminality are indeed things of the past. The Independent International Commission on Decommissioning and the Independent Monitoring Commission will play an important role in assisting the governments to verify that the commitments outlined in today's statement are fully implemented and sustained on the ground.

"President Bush salutes Prime Minister Blair and the Irish Taoiseach, Bertie Ahern, for their leadership on this issue. The United States remains steadfast in its support for the Peace Process and continues to work closely with the British and Irish Governments to achieve lasting peace and reconciliation for the people of Northern Ireland under the principles of the Good Friday Agreement.

Canadian Foreign Affairs Minister Pierre Pettigrew said: "This decision by the IRA is an unprecedented opportunity to advance the Peace Process."

Back in the United States many individual members of Congress and the Senate issued statements welcoming developments in Ireland, praising the courage and negotiating skill of the Sinn Féin leadership and calling for the full implementation of the Good Friday Agreement.

And in a statement the Irish American Unity Conference said:

"We encourage the US Government to resume a leadership role in the Peace Process. Based on the IRA's long-term ceasefire and its recent statement, we believe that the US should encourage Ian Paisley's Democratic Unionist Party to work within the context of the Northern Irish Assembly.

"If the DUP is not willing to sit in government with all the duly elected parties, then the US Government must encourage the British-Irish Intergovernmental Conference to take over the temporary administration of Northern Ireland. That joint authority should, in our opinion, continue until the elected representatives agree to work within the framework of the Northern Irish Assembly that was democratically approved in 1998 in the Good Friday Agreement.

"Based on the IRA's substantial and significant commitments, the Good Friday Agreement should be fully implemented by the British and Irish Governments with no more excuses. The sections needing urgent attention include the following:

o Putting into service all the cross border administrative provisions,

o Demilitarising the border counties, and