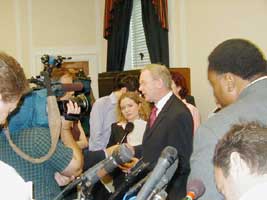 Speaking in Washington on Thursday last Martin McGuinness gave his response to the historic IRA statement: "I warmly welcome today's statement and to commend the IRA for this decisive initiative. It contains the potential to unlock the political stalemate that has frozen the Irish Peace Process and the implementation of the Good Friday Agreement. There is now an inescapable responsibility on the British and Irish Governments to push urgently ahead with the implementation of the Agreement but also on the leadership of unionism to finally accept the principles of power sharing, equality and human rights.

Britain's role in Ireland has historically been negative and divisive. We have seen the consequence of this in every generation particularly since the partition of the island, against the wishes of the Irish people, 80 years ago.

Today's momentous decision by the IRA is a clear recognition that there is now an opportunity to resolve these historic difficulties peacefully and democratically. This places an enormous responsibility on all of us to seize this opportunity to ensure that conflict never happens again. We can do this by making politics work. There is a particular responsibility on all of us who argued that there is a political and peaceful way forward to prove this case by delivering real and meaningful progress. Irish republicans, and friends of Irish freedom across the world, including the huge Irish American community in the United States, must now take the lead role in the unfinished struggle for Irish unity, for justice and for freedom. That is now our collective responsibility and I welcome the very tangible expression of support that is being offer here today both in the Congress and the Senate.

The two governments have an urgent duty to implement the Agreement in all its aspects. In particular this means that the British Government must stop pandering to negative unionism and those in their own system who seek peace only on their own terms. The British Government must energetically address the demilitarisation, equality and human rights agendas urgently. The deprived communities who have suffered discrimination, injustice, inequality and repression must see immediate change. The Irish Government must begin to act, as it has never done, to protect the rights and entitlements of all its citizens, particularly those locked, against their will, into the British partitioned state in the North of Ireland. Unionists who are for peace and for agreement must end their ambivalence and accept the need to tackle inequality, injustice and sectarianism. And Ian Paisley's party, the DUP, must now to decide if they want to put the failed past behind them, to end the intolerance, bigotry and triumphalism and to make peace with their Irish nationalist neighbours, North and South.

If others in political leadership here in the United States, in Britain and in Ireland respond to today's IRA statement in a spirit of generosity and openness, the faltering Irish Peace Process can be revived successfully. The way forward is dialogue, negotiation and accommodation. And in a world beset with conflict and division, the success of the Irish Peace Process can offer much needed hope for the future."