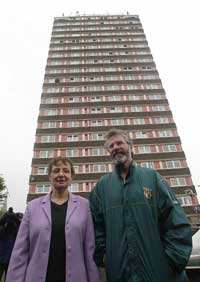 Update to Annex 1 of the Joint Declaration

This paper provides the updated version of the normalisation programme which was promised in the British Government's statement 28 July.

The steps which will be undertaken in a normalisation programme assuming an enabling environment is created and maintained will be as follows:

o Within the first eight months, in an enabling environment, we would have achieved:

o The vacation and closure of Forkhill Base; the removal of Tower Romeo 12 in South Armagh; and dismantling of the super sangar in Newtownhamilton. Work has already started and will be completed within a six-month period.

o The removal of the observation post at Divis Tower in Belfast and the two observation towers at Masonic in Londonderry. Work is beginning this week and will be completed within a six-month period.

o The successive removal of two towers in South Armagh G10 (Creevekeeran); G20 (Drummuckavall). Work will start within a few weeks and be completed within a six-month period; with the sites restored to Greenfield status as soon as possible.

o The publication of a structured plan for phased reduction in troops to peacetime levels.

o The continuation of the review of the police estate with action taken as agreed with the Policing Board following consultation with District Commanders and local communities, including work to defortify some 24 police stations.

Within the next 12 months, in an enabling environment, we would have achieved:

o The vacation and demolition of the remaining South Armagh towers. These sites, with the exception of a Blue Light communications site at Crosleive, would be returned to Greenfield status as rapidly as possible thereafter.

o Progressive withdrawal of soldiers from sites where co-located with police in Armagh (Crossmaglen, Newtownhamilton, Middletown) and in Fermanagh and Tyrone.

o The removal of the military base within Maydown police station.

o A reduction in troop numbers in line with the published plan.

o The return of private property on vacated sites.

Within the final four months, in an enabling environment, we would have achieved:

o Further implementation of the police estate review, as determined by the Policing Board.

o Additional opportunities for the police to patrol without the use of armoured vehicles.

o The vacation and demolition of the observation post at Rosemount in Derry.

o The vacation, closure and disposal of all military sites to leave no more than 14 core sites.

o The further reduction in Army and other service levels, including the disbandment of the operational brigade headquarters, to a permanent military garrison of no more than 5,000. The size of the longer-term garrison is likely to fluctuate in response to global demands on the army and its overall complement.